India : First release into the wild of a couple of Western Hoolock Gibbons by the Huro program of SVAA 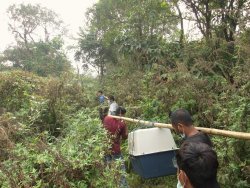 World première : release to the wild of a couple of Hoolock Gibbons
© HURO program -SVAA

Rémi and Robinson were released in the National Nokrek Park mid-February after 7 years in the rehabilitation center of the Huro program. Since then, they have been followed successfully as they were discovering their new territory.

It is a new page of their life that has begun.

Congrats to all the members of the SVAA team and thank you to all of you as you permit TENDUA to help SVAA since 2009 thanks to your donations. 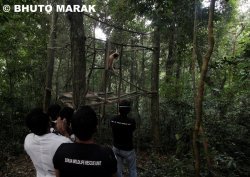 World première : release to the wild of a couple of Hoolock Gibbons
© HURO program -SVAA

The story of these two gibbons is the following: Rémi is a female at the age of 7 months on June 4th, 2009, by the SVAA team. She was saved from a village where she was attached to a ficus tree for one month at least without food or water. She survived by eating leaves of the tree and drinking rainwater as gibbons are used to do. She arrived to the centre very wick, near death, with a high malnutrition responsible of an abdominal œdema, an immune deficiency and dehydration at near 10%. 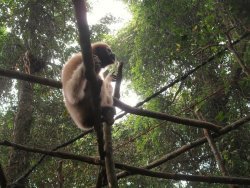 Robinson is a male that has been rescued at about one year old by SVAA on May, 30th 2009. He was retained illegally in a very remote village near the National Park of Balpakral, where his parents were killed to capture the baby. The rescue operation was successful and Robinson joined the clinic in Tura where he received the first aid during one week. He suffered from a medium malnutrition that was soon regulated. He did not have such diseases as Tuberculosis, Herpes neither Hepatitis. He formed together with Rémi the first couple of young in the rehabilitation centre.

And now, they are back to freedom!

Gibbons live in couple for life: it is then a really true and nice story that has been possible thanks to the work of SVAA and modestly to TENDUA! Thanks to all of you! 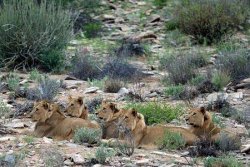 In our last newsletter n°13, we informed you that the lionnes Xpl-59, 11-years old, has “seduced” just-just sexually mature mâles, called the 5 Musketeers. Romance was in the air...

Anyway, news are excellent : the lionnes has been observed with her babies: the next generation of desert lions is born!!

A new generation is born !
© TOSCO

Wishing them all the best, and that they will be able to avoid all the threats under which they live.