India : the HURO program of SVAA for the conservation of the Western Hoolock Gibbon

2nd International Conference for the breeding and conservation of the Gibbon, Perth, Australia, March 2015
© SVAA - mars 2015

There are only 236 individuals in whole Meghalaya and less than 3 000 in whole northeast India. The decline of the Hoolock populations has been estimated, from 100,000 individuals to less than 5,000, it is said a decline of more than 90% (IUCN). The Huro Program is also turned towards the other species of primates from northeast India which suffer also from poaching and loss of habitat. In this region live Assamese Maccaque, Stump-tailed Maccaque, Eat-crab Maccaque, Langur... The indian scientists foretell that the Meghalaya will be a desert within 30 years, maybe less. The survival of the specie only depends on a human action.

Apart of managing the Rescue center, a part of the team (the Sonja Wildlife intervention Unit SWIU) works on rescues, patrols, awareness and reintroduction efforts (habitat and population studies monitoring). A first Gibbon pair should be released in the coming months as soon as all the parameters will allows SVAA to do it safely (security and control over the release site foremost). Other primates’ species were also rescued and successfully released by the SWIU including 5 Macaques and 5 Bengal Slow Loris. 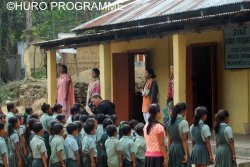 Attached to the rescue center HURO also operates a private, free and secular rural school welcoming over hundred children from rural and remote areas of Meghalaya since 2010 (with 108 pupils in 2015). Besides being taught the national curriculum, the children are also made aware of the importance of the biodiversity one hour every week and hold events for nature and wildlife in other schools.

In January 2015 an agreement was signed with the villagers to bring 44 hectares of untouched forest under the protection of HURO. Yet, the political instability in the area makes this agreement fragile. That is why Huro programme is now considering buying a part of the reserve forest, to definitely bring it under their own cares and to avoid hazardous situations for the first Gibbon release, previously programmed in February, but has been delayed : unfortunately wild elephants and political instability have delayed the operation for a few months (hopefully before the end of 2015).

A World premiere : the birth of Sanjay! 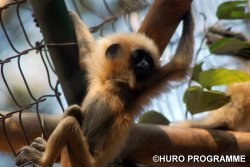 End of 2014, The HURO program welcomed the first birth in captivity of a baby male Western Hoolock Gibbon. It is a World premiere! Sanjay’s parents were each rescued by the program Huro. Gibbons choose their compagons for life... 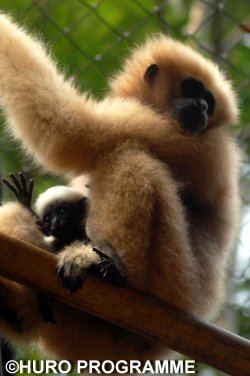 Colombia : The NATIVA Fondation and the tapir

An animation to learn more on the discreet tapir: Pinchaque, the Colombian Tapir. in August 2015, it doesn’t rain a lot in the Sierra Nevada de Santa Marta, Colombia ; tapirs are even more discrets than usual. And more and more cows are feeding on the Denta’s territorries. To move forward, the program of the Nativa Foundation needs at least 5 additional camera traps to the four already installed in the field. TENDUA is considering a way to help NATIVA and you will talk about it shortly.

The Snow Leopard with the Snow leopard Trust 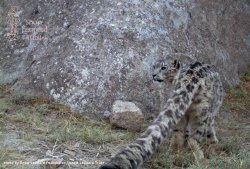 The snow leopard’s habitat is heavily used for livestock grazing, and herds continue to grow. What does this development mean for the endangered cat? Our India team has found some interesting answers: livestock grazing isn’t necessarily a problem per se, but it can quickly become one if herds grow too much.

All hopes are on the so called Five Musketeers There are only a few adult males left in Namibia‘s desert lion population, these young guys are a big hope for the future as very few males are remaining among the desert lions’ population.

On the 2nd, August 2015, the XPL-59 lioness of the River Hoanib herd had no cub after mating with some of the 5 Musketeers, observed in mid-July 2015. Two weeks later, she had again her oestrus and the Musketeers have found her in the same part of the River Hoanib. Two of them (XPL-90 “Polla” & XPL-91 “Ben”) stayed with the lioness. Although these lions are only about 3.5 years old, i.e. not sexually mature - males are mature at 4 -, they both have been observed copulating with an 11 years old lioness.

Lions’ Populations in Africa
The map on the left shows how much remains of lions in Africa and where. The right map shows where lions lived previously (in red). - © TOSCO

The map on the left shows how many lions remain in Africa and where. The right map shows where lions previously used to live (in red). The lions are listed as “Vulnerable” on the Red List of the International Union for Conservation of Nature (IUCN); In West and Central Africa, the species is now classified as “in danger of extinction.” To read more: Current news - 2015

Eco-volunteering for Cetaceans in Reunion island

Present for the 2nd austral winter (the humpback whales’ season) in the Reunion island, TENDUA has gathered this year 5 eco-volunteers, in partnership with the diving club “Dodo Palmé” in the city of Le Port. The eco-volunteers were trained one day on June 27th, 2015, in order to be able to accompany underwater encounters with the humpback whales, dolphins (bottlenose dolphins, great Indo-Pacific dolphins, spinner dolphins ) and other seabirds visible in the Reunion waters. TENDUA proceeds to the records of data on observations of humpback whales; an assessment will be communicated at the end of the season. Here the last article on our website: Les baleines artistes de l’Océan Indien

Unfortunately, while in previous years the humpback whales, by their presence, “have made the show” for the residents and the tourists, the waters of the Reunion in 2015 remain orphans of these magnificent Ocean’s ambassadors. However, the season is not finished: it is unclear whether the animals are going to arrive later or if they avoid Reunion. As for the possible causes of this delay or disinterest (it seems that Mayotte and Madagascar know the same situation), it is too early to decide; only assumptions may be issued. Scientists already put forward a version El Niño [1] 2015, unless it is El Niña? Regarding the construction of the new coastal road (12 km on the sea for € 1.9 billion) and the noise generated by this construction, and also the increase of boaters on the coast, including jet skis, nobody evokes these elements as potentially disruptive for cetaceans.

Eco Phenix from the college “Paul Bert” in Chatou

Thank you to the mini-company Eco Phénix which markets cardboard tables and sent us a check for € 140 to contribute to the conservation of biodiversity !

[1] 1: El Niño is the warm phase of the El Niño Southern Oscillation (commonly called ENSO) and is associated with a band of warm ocean water that develops in the central and east-central equatorial Pacific (between approximately the International Date Line and 120°W), including off the Pacific coast of South America. El Niño Southern Oscillation refers to the cycle of warm and cold temperatures, as measured by sea surface temperature, SST, of the tropical central and eastern Pacific Ocean. El Niño is accompanied by high air pressure in the western Pacific and low air pressure in the eastern Pacific. The cool phase of ENSO is called “La Niña” with SST in the eastern Pacific below average and air pressures high in the eastern and low in western Pacific. The ENSO cycle, both El Niño and La Niña, causes global changes of both temperatures and rainfall. Mechanisms that cause the oscillation remain under study. Developing countries dependent upon agriculture and fishing, particularly those bordering the Pacific Ocean, are the most affected. In Spanish, the capitalized term “El Niño” refers to the Christ child, Jesus (literal translation “The (male) Child”). La Niña, chosen as the ’opposite’ of El Niño, literally means “The (female) Child”. El Niño was so named because periodic warming in the Pacific near South America is often noticed around Christmas