France validates and finances the slaughter of wolves and sharks.

TENDUA was contacted by a wolf protection organization in Latvia that was wondering about the hunt wolf, currently taking place in France. With the agreement of the CAP LOUP collective, TENDUA translated into English the press release of CAP LOUP collective dated 07/24/15 concerning the decision of the Agriculture Minister Mr Le Foll to ask for downgrading the wolf from the protected species’ list in Europe: The French Government’s Absurd and Outrageous Attempt to Bring Down Wolfs Status- 24th, July, 2015. To let know the madness that seized the French politicians against the wolf, TENDUA has proposed to make contact with European associations for the defense of the wolf. We will keep you informed of the actions that may follow.

One of the last Press Release of the CAP LOUP Collective : A mass slaughter of wolves ordered for political purposes - August 17, 2015.

The Reunion island : the “sharkcide” state

Local, regional and government authorities seem to have their mind turned only towards the duration of their respective mandates. They probably do not question themselves about the disastrous consequences of choices they made in the fight against sharks’s accidents : they choose the baiting and the fishing, at a great expense to taxpayers. No word on the pseudo-scientific program, neither on its conditions that are as opaque as those of the contracting of the new coastal road of the island. In short, millions of euros distributed by the Region on the European funds to the Regional Fisheries Committee and some 5 fishermen + the creation of an observatory that hopes becoming the global benchmark for “shark risk management by fisheries”, with a previsionnal budget that is going to be financed from public money up to about € 1.5m / year (for rent and the creation of 5 posts already allocated in the utmost discretion, but none to any shark experts)! Omerta, opacity ... but they make the public believe that it is protected by these measures, and this is where the greatest danger !! On the one hand some politicians, a lot of public money and a handful of people, eager for media coverage and recognition, on the other hand, environmental protection associations representing thousands of people and whose representatives are threatened, insulted ... and that do not even have the opportunity to express themselves peacefully!

To learn more, go on our blog protection-requins.org . We last were threatened and insulted on August, 14, 2015: 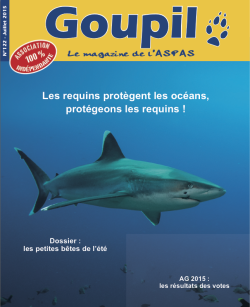