In November 2015 : TENDUA exposes pictures of nature at the Town Hall the 6th arrondissement of Paris

Besides the contribution of the best professional photographers - Julie Boileau, Frédéric Buyle, Tony Crocetta, Michel and Christine Denis-Huot, Pascal Kobeh, Yvan Kislov, Yves Lefevre, Vincent Munier and Alain Pons - and connoisseurs, members Tendua, who generously offered their images, and thanks to the partnership with the laboratory of analog and digital photo RAINBOW COLOR, this exhibition may take place. An exhibition of beautiful images, offered for sale, to say the beauty, the magic, the mystery and the fragility of nature, so indispensable to human kind. The images give to contemplate, to meditate, perhaps to give birth to the desire to protect our beautiful planet.

Africa (Kenya) : the lion is in danger

The African lion (Panthera leo leo) is classed VULNERABLE by the IUCN. It means that its extinction in the wild is practically already programmed.

An estimated two-thirds of the lions have disappeared over the last fifty years. The Savannah habitat has decreased by 75% during this period, due to urbanization and the increasing agricultural and livestock areas. A Research from Duke University, North Carolina (USA), has been published in late December 2012 : it sets the current number of these cats between 32 000 and 35 000, against nearly 100,000 in 1960. The most significant decline was observed in West Africa, where it would remain only 500 lions. 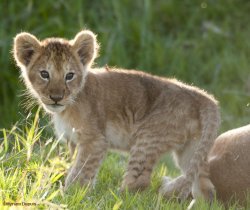 Many threats hang over the heads of the African lions: trophy hunting, poaching for medecine, poisoning to protect increasingly large herds, ... In Kenya, in the Masai Mara National Reserve, lions are jointly threatened by poaching and the poisoning of carcasses for protection of herds, by waves of drought and the action of the insecticide Furadan that would have killed at least 76 lions between 2001 and 2010 out of a population estimated to be about 2,000 lions. Read our article : The Kenyan Savannah : the filent drama of the Massaï Mara.

Thank you for your attention.