Some deserts are even more desert than others. Driving from Walvis Bay to Sandwich Harbour between sea and sand, or around Sossusvlei at the foot of the red dunes in Namib National Park – Naukluft is a great experience. This desert that gives Namibia its name would be one of the oldest in the world.

From here, going up a little to the north and sinking into the land, beyond the granitic and rounded summit of Brandberg, we arrive in an environment, certainly arid, but apparently less empty than Namib. Some trees and scattered bushes on the ground “dress” the landscape. Yet, locally, the wildlife that can be encountered is described as “desert”. Arriving at Camp Kipwe, still a little north of the Brandberg massif and not far from famous petroglyph stations, we are only an hour’s drive from the nearest «desert elephants». Then we meet them.

Encounter with the desert elephants

The trail crosses the sandy bed covered with bushes of a first dry river and regularly runs alongside small cliffs decorated with long white vertical trails. We don’t see anybody, but these white marks could have been left either by raptors’ colonies and nests or by damans, these small, round mammals, looking like rabbits with short ears and, curiously, distant cousins of elephants that are living in rocky shelters. It’s early afternoon and it’s still hot. They’ve all had to put themselves in the shade.

The driver leaves the main track and sinks into a small gorge that must lead to the bed of the Huab River, our goal. The landscape is getting closer. A beautiful male Oryx, disturbed, leaves on the rocky slope in front of us, not without turning several times to look well who came to disturb him during his meridian nap in the shade of a small acacia.

Two more turns and we arrive in the main bed of the river. If the banks are indeed a little steep and sometimes rocky, the bottom of the river, sandy, of easy circulation, is rather well wooded with trees and bushes. The elephants are coming in quietly from the upstream almost at the same time as we are. We haven’t had time to look for them; they’re there. They appear wet. They come from the water point located a little higher in the river. The groundwater, which explains the vegetation, is not so far under the sand. The guide explains to us that in order to avoid conflicts with humans, they have created permanent water points for them. This prevents elephants from drinking from the same “taps” as humans and reduces the sources of conflict. Moreover, since the local villages practice only the rearing of small ruminants, sheep and goats, and no cultivation, no fields or gardens, the risks of confrontations are reduced.

The trails in the area regularly display “Beware of Elephant” signs, but it is especially during night traffic that you have to pay attention. During the day, however, they should see themselves in open and rather clear landscapes. The amount of dung crossed by place, like those seen on the way to Palmwag the next day, suggests that elephants also use these tracks. Here we are on their way into the dried-up bed of the Huab River. 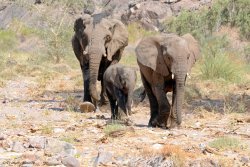 The Seven of the Huab River

In this small group they are seven: two adult suited females, one young male- still teenager - and two juveniles. The vehicle’s stopped, the engine’s shut down, and the animals are coming at us. There has been wind recently and the river acacias have lost many pods. These pods, rich in protein, are not lost to everyone. Elephants pick them up one by one with a beautiful dexterity. Locally this tree is called «ana tree». This is the species Faidherbia albida, formerly Acacia albida, also known to the Sahel on the other side of the equator where its vernacular names are during «balanzan», «Kadd» and «Gao». Watching the animals’ trunks searching for and “picking” on the ground the pods that are slightly curled up on themselves, is quite fascinating, especially when it’s two metres from your vehicle. The animals are not just indifferent to our presence, they especially seem to feel no discomfort, no fear. Their serenity is amazing. We have never seen elephants in such good conditions. The driver moves the car several times to stay in contact with them because they walk while feeding or rather feed while walking a good step towards the downstream. 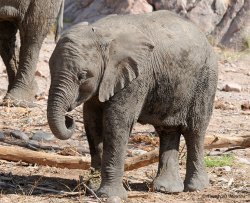 When we see the two females stop to feed their respective pups right in front of the vehicle, we think we are very lucky. You can’t imagine worried animals abandoning themselves like that. Elephants may not be weaned for 4 or 5 years. One of the two young must approach this age, two small white points already protruding from his mouth, on each side of the trunk. Like all baby elephants, he puts it down on his head to suck, but he must lower his mouth rather than raise it to reach his mother’s left breast. A little further, the second, younger, with the same trunk movement folded on the forehead, must raise his head to arrive at the same result. Meanwhile, the young male approached the car and leaned for a moment on the back. No one moves, no one talks.

At this distance we look at the animals as well as we can. They are so extraordinary and it is so obvious ! Their eyes bordered by long lashes, their trunk with all its suppleness, virtuosity, softness and certainly also its strength, this incredible skin, but of which sensitivity cannot be doubted, these ears, behind which one sees very well the blood vessels that allow them to evacuate too much heat, these two pectoral nipples so close to those of the great primates. 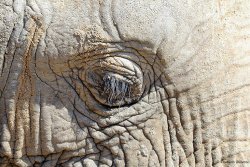 We’re looking to exchange gazes with them, but that doesn’t seem to be happening. Their gazes seem internalized, as if they were thinking, thinking about something else. How to imagine their representation of the world, olfactory and probably sound too? We are only visual and seem a little lost or disappointed without a wink or a collusion look. This must mean nothing to them. That’s when we realize that these elephants are “purring”. It is difficult to find another word to describe this deep, powerful sound that we hear and feel. It is known in this species and it is the term used to describe it. We will hear it again the next few days as we watch families of elephants come to drink at the water points of the great national park of Etosha, even a little further North. This afternoon, the seven animals that wander through the dried-up bed of the Huab River share with us the sound expression of a certain well-being. It has to be contagious.

Our total excursion lasts from 2.30pm to 5.45pm, about an hour, from 3.30pm to 4.40pm, in the bed of the river. We are alone with the seven elephants, there is no other vehicle and even if this time shared is very short it really exists. The driver explains to us that a group of about thirty is more downstream and that the local population is a few hundred, 400 to 500 if I understand correctly. 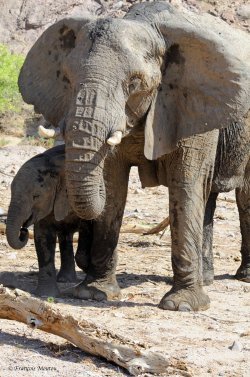 These animals are free of movement and are not in an enclosed space. In southern Africa this is not so common. For example, Etosha National Park, already mentioned, is closed and it is not the only one. Here the desert is open. Animal densities are low and human activities are spread over large areas. These elephants benefit and the local village communities benefit. The money raised during the visit of the river and the elephants is shared among the various actors, including the villages that live with these great neighbours.

On the way back, we cross Gangas, calaos, some Springboks grazing in the great dry stretches crossed. Everything seems calm and serene between the Huab River and Camp Kipwe. No one knows how long this situation can last, but it is certainly not immutable. The risk would be that the desert would become really desert, what has already happened.

author : François Moutou, Veterinarian, epidemiologist and member of the French Society for the Study and Protection of Mammals (SFEPM)