The soil : the most living environment of the planet

France...and the rest of the World!

The atmosphere is a mineral substance [1] composed of gas, mostly of nitrogen at 78%. It protects life on Earth by absorbing ultraviolet solar radiation, warming the surface through heat retention (greenhouse effect), and reducing temperature differences between day and night.The hydrosphere is also a mineral substance: the atomic bonds that form the H2O molecules are very solid. It would take a lot of energy to break such molecules. In fact, human activities pollute all bodies of water in a cavalier way, but man has not yet managed to destroy it...97% of the planet’s water is in the oceans that have an average depth of 3800 m. We know that without water, life as we know it is impossible.

Finally, the soil, the lithosphere, is an organic-mineral medium [2], a complex environment whose balance is very fragile because the bonds between organic and inorganic materials (clays) that connect atoms together are electric. This delicate balance works fine as long as man does not interfere, but is heavily threatened wheever man intervenes within it.

Environment destruction : between 12 and 15 million hectares of farmland destroyed each year

At present, the conventional - or rather “productivist”- agriculture destroys between 12 and 15 million hectares of farmland each year, either by erosion, irrigation that generates salinization, or by desertification.

When modern humans started agriculture, the desert represented 11% of the land surface. Today, deserts take over about 33% of the world’s land. In the only XXth century we have destroyed one billion hectares of land. And we continue to desertify about 10 to 12 million hectares each year.In addition, we destroy approximately 17 million hectares per year of tropical and equatorial forests for conversion into agricultural land and urbanization.

We gain ground on the forest in order to plant out oil palm or GMO soy.
© M. Dupuis

We obtain a balance of 5-7 million hectares of new land each year. In parallel, the population increases by some 80 million people every year. And do not forget that one billion people are starving ...Clearly, agricultural land per capita decreases.

And then there are those who have been destroying soils for at least a century, and earning billions: representatives of the chemical industry and other merchants of fertilizers, pesticides, and GMOs. According to these “experts”, the only way to face the increase of the population is “more fertilizer, more GMOs” and more benefits. Agriculture no longer truly feeds people, but it only is there to make profits.

Soil destruction : 90% of Europe’s soil activity in Europe has been destroyed

The production of cereals in France has not increased since 1995: it is stagnating because the soils are in the process of “giving up” ... In Europe, soils could produce 150 quintals a year but they are no longer able: they produce 80 quintals/year. In the 80’s, 90% of Europe’s soil activity in Europe has been destroyed.

The myth of Ploughing
© Larousse

The three stages of soil erosion are always the same:

2) CHEMICAL DEGRADATION : One of the nature’s laws is that rain drains elements such as nitrates, phosphates, magnesium, calcium ... into the soil and the fauna returns them to the surface. When fauna dies, there is no more biological work by earthworms (anecic fauna). In France, today, there are less than 50 kg per hectare of earthworms while they were previously two tons per hectare. The leaching phase of soil is becoming acidic. And here we are: the pollution of rivers, lakes, and aquifers by nitrates, phosphores ... Acidification corresponds to a loss of elements such as calcium: the humus and clay can no longer bond together and there is no more clay-humus complex.

3) PHYSICAL DEGRADATION : there is no more soil. There is no more calcium to fix the clay-humus complex. We know what is happening in Europe nowadays: when heavy rains fall, all the rivers become muddy. We consider this as “normal” but it is not. If the phenomenon is now global, it does not reflect its “normality”, but rather that the soils are “washed up” and are no longer able to fulfil their role because there is no more biological activity.

Soils are sick, not inert!We must change the postulate, soil is an inert substance, according to which our conventional agriculture operates. Consequently, we put fertilizers, which, as we now know, make plants sick. Then, we treat plants by pesticides. The aim is to produce more, and quality has no say any longer. However, we know now that 80% of the biomass is found in the soil, making the soil the most living environment of the planet. It contains more than 25% of plant and animal species currently described.

Loss of biodiversity : from 10 to 2 species of wheatIn the early 20th, France cultivated 10 species of wheat. Now only two species are grown: durum wheat and tender wheat. All species that do not respond to fertilizers have been eliminated. Spelt is a cereal that has almost disappeared because it did not respond to nitrogen, but was saved by organic farming. From 3600 varieties of fruits grown in France, less than 600 are still grown!

Natural solutions : more than 350000 species of plantsInstead of practicing diligently this quasi-systematic destruction of biodiversity, why couldn’t we select the hardiest plants that require little water, do not need fertilizer and protect soils?There are some 350,000 species of plants. Some do not need water and not even one needs to be genetically modified. This is another approach to molecular genetics and the study of soils: observing and learning what exists thoroughly.

Today, some unsubsidized agricultural models work quite well, especially in South America and New Zealand. These alternatives have a common point: learn to respect the soil, observe how it works - it is similar yet varies by region - and learn how to cultivate it without destroying it. In short: apply what the nature has been doing by itself these last millions of years... And respect the laws of soil biology.

Nature has a sustainable model: just study it!

The fragile electrical ties between organic matter (humus) and minerals (clays) have been destroyed in most soils. It is obvious that soil components are eliminated with the wind or water: muddy rivers, trees uprooted in the wind because the roots cannot go into the soil...The first precept to remember is to never leave soil bare, whether it is a field, a garden or a vegetable garden to prevent its erosion and to protect it against rain and the sun, because this is how nature protects it in the woods, or in fields with weeds.

Inspiration for Europe: the way the temperate forest operates

In autumn, the forest litter, composed of twigs, dead branches of trees, leaves, falls. The epigeal fauna composed of arthropods such as springtails break this down. They are about 3 to 4 billion per hectare. Only 10% of the species are known. They live in the top few centimetres of soil, away from direct sunlight, up to about 20-30 cm deep. Their job: to attack the soft parts of litter, such as leaves.

Then, the Acari attack the hardest parts of litter such as leaf veins and sticks. The population is very diverse, 3-4 billion of animals per hectare. Then, it is the turn of pseudo-scorpions, spiders and woodlice to eat wood, stems rapeseed or corncobs.

The earthworm: 13 families, more than 7000 species, the largest biomass on Earth.
© source dsne.chez-alice.fr

Between both of these, the anecic fauna mixes clays that come from the rock, and humus, the organic matter degraded by the epigeal fauna, which comes from the surface, in order to create the clay-humus complex. 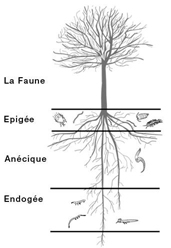 In brief, worms feed on feces of Acari and springtails, and they do the work of mixing and airing of the soil. This entire fauna is responsible for breaking down the detritus. They prepare for the arrival of fungi that convert lignin (component of wood) into humus. This fauna produces “faecal pellets”, which air the ground. This is the “carpeting” of the forest: the moist forest floor consists of these pellets + 80% vacuum. Thank to this process, the forest floor has a permeability of 150 mm of water per hour, whereas silt ploughed by man, has a permeability of only 1mm per hour, in some places 1mm per 24h ... For info, rainforests absorb 300 000 mm of water per hour.Humus is thus created on the surface thanks to the intervention of fungi.

Fungi on dead branch in the forest
© M. Dupuis

In the spring, 1 to 2% of the mineralized humus (through the presence of bacteria) give rise to phosphate, nitrates, sulphate ... which travel down through the soil layers and are recovered by the roots of trees, plants. It is a “closed” system.

The tree: the great water manager

On the forest floor, the tree grows fungi that store water in the soil. Thanks to fungi, the forest soils are cool, even in summer. It also handle excess rainwater in water tables. Trees are able to develop deep roots: such as an oak with 150 m of underground roots, an elm with 110m, a wild cherry with 140m, a 2-m high jujube with 60m...The tree roots attack and dissolve the rock. Even at this depth, underground leaves and dead roots are “cleaned away” by the endogenous fauna. The tree sends up mineral elements to its foliage, where photosynthesis takes place.Given the important role trees play in our biosphere, the leadconsumers of CO2 our society produces more and more, it is urgent to protect trees.

Can soil be repaired?

Specialists are now able to provide solutions to repair soil while taking on the model of nature developped in the region. It is still feasible for most any regions in the world, but, as in nature, it may take some time ... “Eco-agriculture” is not an epiphenomenon promoted by crazy environmentalists. One of these models is permaculture: to finally work with nature and not against it. This requires a thorough understanding of existing natural mechanisms, geology, chemistry, biology, botany, climate ... and love and respect for soil.

Our European agriculture will have to change: not because it is questioning its future from a philosophical point of view, but the reasons that caused it to be what it has become, is why it will have to evolve. Thus, the reason, which is weighing the most today is an economic one. The European agriculture is living on subsidies and there is no more money. In many respects, the European system is not competitive. Moreover, it “kills” the profession: since 50 years in France, 92% of farmers have disappeared. Indeed, France is losing between 30,000 and 50,000 farmers each year. In Europe, 200,000 “farmers” disappear every year ... On the production side, Europe does not feed itself anymore and France, which was self-sufficient into the 50s, can no longer feed its population. Today, 40% of the wheat produced in Europe cannot be used to make bread or for human consumption, but it is used to feed the pigs! And we do not take into account the loss of diversity...In summary, agriculture as we know it today, not only pollutes and destroys the environment but creates a non-consumable product of poor quality. The process is because it wastes a lot of energy (hydroponics), and requires taxpayers’ subsidies to survive...However, the model continues in a completely artificial fashion. And, at parallel, the consumer, you and me, are becoming more demanding: we require quality.

No wonder if 99% of tomatoes and strawberries in Europe are produced by hydroponics! Hydroponic production is tasteless. If sun gives quantity by photosynthesis, soil, the quality of ground, gives the flavour. Not to mention energy waste: it takes 36 calories of energy to produce 1 hydroponic calorie. We have not over subsidizing tasteless fruits and vegetables, which we (those who can) have to pay for its weight in gold throughout the year...

[1] The inorganic material is a set of chemicals, formed of small molecules, such as certain gases (carbon dioxide, the oxygen, etc..), water, metals (iron, copper, etc.), the minerals from rocks, etc..