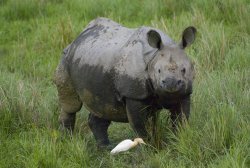 The national park of Kaziranga in Assam (North-Eastern India) is the one to visit if you wish to meet with the Rhinoceros unicornis indicus or, most commonly called the Single-Horn Indian Rhino.

The territory of Kaziranga represents 430km². The National Park was created in 1910 by a decision from the Imperial British Government aimed at protecting the species: only 100 or 200 individual Single-Horn Indian Rhinos remained all of India.

A count performed in 2007 [1] estimated the population of the Park at about 1900 Rhinos, i.e. 60% of the overall Single-Horned Rhinos population. 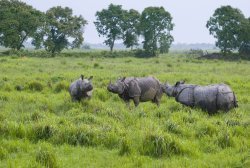 The Indian Rhino is also the biggest of the Asiatic subspecies: the Rhinoceros of Java (Rhinoceros Sondaicus) had only 70 individuals left in the wild in 2005 [1] (Java and Vietnam) and the population of the Two-Horn Rhinoceros of Sumatra (Dicerorhinus Sumatrensis) has been estimated to be 300 individuals in Java, Borneo and Malaysian peninsula, in 2005 [2]. - © M. Dupuis
Footnotes


[1] 2005:source: estimate of February 2005 of the International Rhino Foundation

[2] 2005:source: estimate of February 2005 of the International Rhino Foundation

This population is mainly descendants coming from the dozen of animals that were counted in the census of 1908, which survived overhunting. Whilst the National Park initiative has shown successes, after one century in operation, it would be a mistake to think that the Single-Horn Indian Rhino is safe from any danger of extinction (IUCN classification: EN), even when in 1985, Kaziranga was inscribed in the list of World Heritage Sites by UNESCO.

A few hours by road from Kaziranga, but still in Assam, the Orang National Park (78,82 km²) accommodates also a few dozen Single-Horn Indian Rhinos. The second most important colony of Single-Horn Indian Rhinos (several hundred individuals) is in the Chitwan National Park in Nepal. Unfortunately the species has disappeared from Pakistan and Bangladesh. 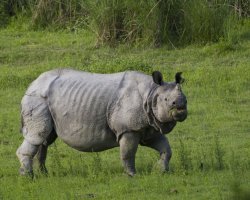 Rhinocéros unicornis
This herbivorous can weight between 800kg up to 2,5t. but he is able to run on short distances with a speed of 55km/h. It has an excellent ear, a very good smell but quite a bad see. It is living between 30 and 40 years. Males reach their sexual maturity not before 9 years old unless females are ready to be pregnant around 4/5 years old, for a birth that will occurs around 16 months later, at the age of 6-8 years - © M. Dupuis

Six hundreds of rangers and forest guards work 24h/day, 7days/week in Kaziranga. They take their turns in the 135 survey posts to fight poaching. The horn of Rhino, composed of 100% Keratin, remains a highly coveted commodity. For Chinese medicine or Middle-Eastern daggers, a horn can command prices upwards of $15,000 USD. In 2007*, eighteen (18) Single-Horn Rhinos were killed by poachers, and three (3) more from January through April 2008. On April 30th, 2008, poachers trapped a mother Rhino. It died from the bleeding after they cut off her horn from her head. Her one-year-old baby, left to fend for itself, was the pray of a tiger. 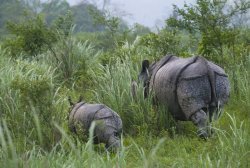 Mother and baby rhino
The baby is close to its mother until 18 months, sometime even more: until the next birth. In the average, a mother is giving birth to a rhinoceron every 3 years. The Single-Horned Rhino prefers plains and opened wetlands, typical in Kaziranga. Sunshine and sunset are the two moments of the day when you can better observe it - © M. Dupuis

Most probably villagers living near the park usually identify the location of the Rhino. They communicate this information to the poachers using mobile phones. Villagers are paid a few hundreds dollars for this information. 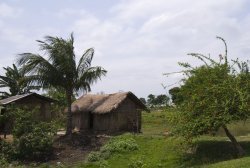 Despite efforts of the numerous rangers and the National Park status, Kaziranga still suffers from a lack of effective means to fight against poachers who are well equipped with high technology. Around 250 rangers have a monthly salary of between 22€ and 30€, 400 earn from 90€ to 150€/month. One ranger having a 12-years experience earns 129€/month - about half of what they say they deserve. 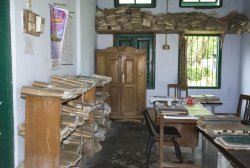 One of the resources of the park is tourism, but Kaziranga is still a little far from traditional touristic routes, which cover the Rajasthan (Ranthambore National Park) or the Madhya Pradesh (Bandhavgarh, Kanha National Parks) for the Tiger. All these parks have to cope with the anthropogenic pressures caused by villagers living around these environs. Villagers are cutting down forests inside the territory of the parks, reducing the natural habitat of wild animals, in favor of agriculture and breeding. 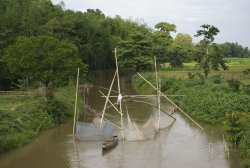 Fishermen
Fishermen share the river with other inhabitants of the Park - © M. Dupuis

Another threat looms over Kaziranga: if 60% of the overall Indian Rhinos population is concentrated in this park, what could happen in case of an epidemic? Moreover, there is a serious risk of inbreeding. Whilst some animals have already been moved from Kaziranga to Orang for instance, this didn’t work well: Poaching is a real risk for these precious animals. 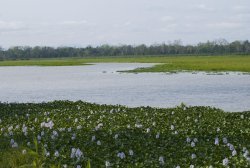 Water hyacinths
Water hyacinths are not endemic to Kaziranga. They float above water and proliferate very quickly (they may double their population in 2 weeks) - © M. Dupuis

There are some solutions

…but they require commitment to act.

[1] 2007: source: office of rangers of the National Park of Kaziranga