The world’s most elusive and charismatic large felid 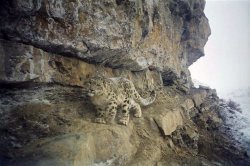 The endangered snow leopard (Panthera uncia) is perhaps the world’s most elusive and charismatic large felid. No one has an exact count because snow leopards are so elusive and inhabit such harsh and remote habitat that they are rarely seen. The wild population is roughly estimated at 3500–7000, spread across a range of 1.2–1.6 million km2 in 12 or 13 countries of South and Central Asia, namely Afghanistan, Bhutan, China, India, Kyrgyzstan, Kazakhstan, Nepal, Mongolia, Pakistan, Russia, Tajikistan, Uzbekistan, and possibly also Myanmar. There are about 600 of these cats in zoos around the world.

Among all threats, a high vulnerability to poaching 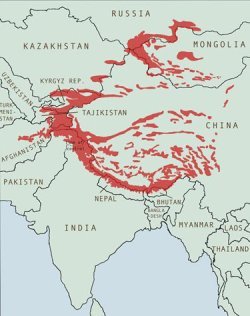 Snow leopards suffer from similar conservation challenges as other large felids, namely persistence at naturally low densities, extensive home ranges, dependence upon prey whose populations are low and/or mostly declining, and high vulnerability to poaching and other anthropogenic threats.

They inhabit mountainous rangelands at elevations of 3000 to over 5000 m in the Himalaya and Tibetan Plateau, but as low as 600 m in Russia and Mongolia.

Although relatively few humans live in snow leopard habitat, their use of the land is pervasive, resulting in ever-increasing human–wildlife conflict, even within protected areas. Snow leopards, and other sympatric wildlife range across the larger landscape beyond protected areas, albeit at low densities.

Since few (if any) protected areas are free of human influence, the snow leopards’ survival hinges upon an uneasy coexistence with subsistence pastoralists and farmers eking out their living from the same harsh environment.

As a resume, THREATS are : Poaching – illegal hunting for the fur trade, and trade in bones for traditional Asian medicine; Loss of prey – a decline in numbers of wild prey due to hunting and competition with livestock for grazing; Problem animals (depredators) – snow leopards kill livestock and are killed by herders in retribution; Loss of habitat – more people and livestock move into snow leopard range fragmenting habitat, so snow leopards become isolated and vulnerable; Lack of effective protection – most protected areas are too small to protect the home range of even a single snow leopard, and many countries cannot afford to pay rangers living wages; Lack of awareness and support – herders living with snow leopards sometimes do not understand why they are important elements of the ecosystem and why they need to be protected.

Snow leopards were first listed as endangered under the 1972 IUCN red list data. The 1975 enactment of the Convention on International Trade in Endangered Species (CITES) of Wild Flora and Fauna prohibited all international commercial trade of Appendix 1 species (which includes snow leopards). All snow leopard range states except Tajikistan are party to CITES, with Bhutan and Kyrgyzstan joining recently. Snow leopards are listed on the Annex 1 of this treaty, which makes it illegal to transport any snow leopard parts across international borders. Attempting to import a snow leopard hide into the USA is punishable by a fine of up to a $25,000. In Nepal such trade could mean a 5-15 year jail sentence.

In the summer of 2008 The Snow Leopard Trust launched its long-term study and began using sensor research cameras to aid the identification and counting of snow leopards. Cameras are set out in places where snow leopards are supposed to come more or less regularly. In 2011, 40 research cameras were set out to photograph snow leopards. Remote-triggering occurs as soon as a movement is detected by the cell of the camera. Of course, not only snow leopards are photographed, but also other animals sharing the same ecosystem ... The Snow Leopard Trust works with governments in snow leopard countries to strengthen conservation policies and programs. Most importantly, the Trust works with local communities and herders on reducing conflict between people and snow leopards. They help them find ways of limiting livestock losses and offer them opportunities to increase their income. The Snow Leopard Trust markets handicrafts made by people in snow leopard habitat in return for a commitment to conservation.

Snow leopards are medium sized cats, weighing between 60-120 pounds. Their scientific name is Panthera uncia, the same genus as most large cats (Panthera). Body length ranges from 39-51 inches, and their tails can be almost as long as their bodies! They have thick, smoky-gray fur patterned with dark gray open rosettes. In the mountains they blend perfectly with the rocky slopes, making them practically invisible. Adaptations for mountain life: • Well developed chest • Short forelimbs with large paws for walking on snow • Long hind-limbs for leaping • Long flexible tail for balancing Adaptations for cold: • Enlarged nasal cavity • Long fur with wooly undergrowth • Thick furry tail for wrapping around body and face

Because snow leopards are so difficult to see, researchers rely on other evidence of snow leopard presence to study them. Scrapes: snow leopards scrape their back legs in loose soil leaving a small depression with a mound of soil next to it. Scent marks: they mark rocks, bushes and boulders with pungent spray from a scent gland near the tail. Cheek rubbing spreads the scent. Scat: or more commonly called feces. This is also a way for cats to say “I was here.” Using these marks snow leopards make sure they stay out of each other’s way or, during the breeding season, males and females can find each other. 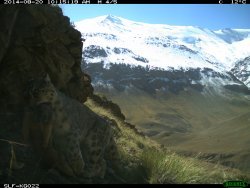 a Snow leopard has hunted a marmot
© Snow Leopard Trust

Snow leopards are predators, which means they eat other animals. The diet varies across snow leopard range. In the Himalayas they eat mostly blue sheep, which are also known as bharal (Pseudois nayaur). In the Karakorum (Pakistan), Tian Shan (China, Kyrgyzstan and Kazakhstan) and Altai (Russia and Mongolia) Mountains, their main prey is ibex, a wild goat (Capra siberica) and wild argali sheep (Ovis ammon). Across their range snow leopards also take small prey including marmots and hares, and they hunt larger birds like snow cock and chukor. Snow leopards are opportunistic hunters, and they will attack livestock that are in their range.