Coral reefs cover less than 1% of the Earth’s surface. They harbour 25% of the world’s known marine biodiversity, and thousands of species belonging to other bioloogical groups, such as marine Invertebrates, microscopic life, Funghi ... 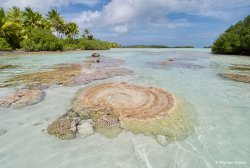 The reef ecosystem, structure of which being built by corals, is, together with humid tropical forests, is the richest in terms of biodiversity, the most complex and productive of the planet. It is urgent to preserve it.

Corals mainly live in shallow areas, quite close to the surface of the sea, in the salt waters of tropical seas where the temperature is between 20 and 32°C and the clarity of the water allows light to penetrate. Coral reefs are made up of billions of small animals, polyps, that live in symbiosis with microscopic algae called zooxanthells. 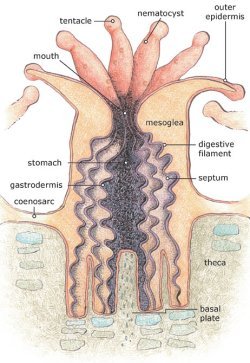 Both species are useful to each other by offering shelter and food. Zooxanthells are plants that perform photosynthesis using sunlight by drawing carbon dioxide (CO2) dissolved in water to produce oxygen and essential food for polyps. For their part, polyps protect zooxanthells, breathe oxygen, produce CO2 and provide their hosts with nutrients from their own waste. Each polyp lives inside a calcium carbonate shell. Polyps gather to form the complex structure characteristic of corals, while zooxanthells are the origin of their colour.

Threats Environmental changes have destructive effects on this association. Threats include:

Human activities are also responsible for coral bleaching (list is not exhaustive!): 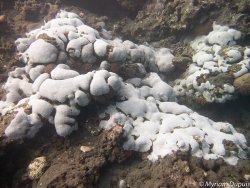 The coral then weakens: it receives less oxygen and ends up expelling its zooxanthells without which it cannot survive. And that’s when discolouration or bleaching occurs. If the stress does not last too long, the zooxanthellas sometimes reintegrate their coral, but when the stress is too high, the zooxanthells do not return and the coral dies, invaded by invasive algae that grow on its surface.

The first observation of a bleaching date back to 1979. Since then, we have been talking about the whitening of corals. These are no longer isolated cases but whole areas of reefs that bleach and die. This phenomenon has been observed everywhere: on the Great Barrier Reef in Australia, but also on Reunion Island, on the Seychelles, on Madagascar, on the Maldives…. The pH of the sea has increased from 8.20 (in 1800) to 8.10 (in 2015) and is expected to continue falling to 7.65 by 2100.

What will be the impact of the disappearance of the corals? Our lifestyles are producing more and more CO2. Corals contribute to reducing the amount of CO2 in the planet’s atmosphere because the coral skeletons they build consists of aragonite crystals, that is to say calcium carbonate. Carbonate is only dissolved carbon dioxide; calcium is found in large quantities in water. Carbonate is proportional to the carbon dioxide present in the air. The corals therefore recycle this CO2 in a rigid skeleton and participate in their own way in the purification of the atmosphere. But the acidification of seawater has the following consequences:

We must therefore protect the coral, and protect the ocean and its inhabitants, because each species depends on another, in order to achieve this wonderful and fragile balance that gives life, and on which the human species also depends. Protecting is about thinking and changing one’s ways of behaving, including how one consumes.