What you need to know about 5G

When it comes to the race for progress and technological innovation, it is no secret that modernisation in all its forms is almost systematically looked at with a degree of concern and scepticism by many. And rightly so. How will these new technologies impact our existence in the world we know, and to what degree will it affect us? How much so for the better? And what might be the collateral, unintended results brought about by these changes?

Is 5g the starting point of a new world ?

5G, or “fifth generation of wireless networking technology”, is described by its proponents as the starting point for a new world which will bring about a “fourth industrial revolution”[1]. Built in and around hospitals, schools and other public infrastructure, it is said of it that it will facilitate our lives, which is of course the point of most technologies. However, it is imperative to understand the implications of what is being presented to the public as a necessary step forward in modern science.

The first major advancement in this scientific domain was characterized by the invention of 3G, which allowed users to connect to the internet from their mobile devices at any time, bypassing the need to connect to a Wi-Fi router. It was slow and impractical at best, serving mostly for small tasks such as emails or other services which wouldn’t require much data. Then came 4G, which allowed for a much better internet experience. In summary, 4G was an improved version of 3G. Much faster, it would allow users to load more data, enabling them to watch videos, download movies and much more.

Now comes 5G. Logically, one would assume that 5G technology would be, as was 4G, an improved version of its predecessor. However, in the same way that 3G innovated and made its 2G predecessor (improved phone networking with no internet connection) obsolete, 5G brings more than just faster data exchange and browsing to the table.

Facial recognition and data collection : the end of privacy ?

As described by former Brigadier General Robert Spalding in an interview with Valuetainment[2], 5G operates on the basis of facial and vocal recognition as well as third party data management. This means that user information is entrusted to a faceless corporate entity, not the user. Unlike 4G where the data is stored on the user’s device (except for online data management and other “cloud” type services), and where one can simply opt out of it by not purchasing a smartphone, this new generation of networking technology is imposed on everyone. Built around cities, it can monitor everyone, as seen in Washington, which was the first state in America to allow facial recognition for law enforcement purposes.

But the concerns over 5G are not limited to data collection and privacy violations. It has also been the cause for concerns regarding its potential as a health and environmental hazard. One of the more worrying elements in this area is that this technology is still very much in the experimental phase in terms of its effects on living things. So much so that some leaders have opposed the roll-out of 5G. As politician Céline Fremault, the Belgian Minister of Environment and Energy said,

«The people of Brussels are not guinea pigs whose health I can sell at a profit. We cannot leave anything to doubt.»

This statement shows that concerns over 5G are more than the product of a few reactionary conspiracy theories. 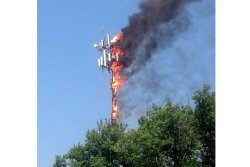 Such were these popular concerns, that multiple relay antennae were set on fire. In the UK reports indicate that up to 77 towers had been targeted in a single month, with cases also reported in Ireland, Cyprus, Belgium and Australia, where counter-terrorist police were deployed. However, many of these towers were not 5G, and in some cases the damage led to outages for essential emergency services.

Though vigilantism is not to be condoned, the scepticism surrounding the topic can be understood. For, as everyone was being submitted to strict COVID-related health guidelines in the form of nationwide lockdowns and social distancing measures, many people noticed that optical fibre was being laid out in their streets, often unbeknownst to local residents. Furthermore, a lot of these technical operators were spotted without masks and violating social distancing rules, while the epidemic was at its peak.

However overblown some of the reactions might have been, there is no question that 5G will substantially increase public exposure to radiofrequency and electromagnetic fields, which many studies have shown to be harmful to humans as well as to the environment.

Indeed, the existence of radiation poisoning is not disputed by scientists, and it has been linked to different types of cancers, such as spinal, pulmonary, and cardiovascular to name a few [3]. Furthermore, there are reports of radiation exposure causing mood modifications, and even genetic imbalances in some cases. Though they may be invisible, radiofrequencies are as real as anything the naked eye can see and like any other physical phenomenon they can be measured, in this case with devices such as EMF meters (electro-magnetic field). These are readily available online and allow users to monitor the intensity of electromagnetic radiation in a given area. These readings often show dramatical levels in and around cities.

In regard to these radio emissions, Claire Edwards, a member of the United Nations from 1999 to 2017 and one of the leading voices against the mass deployment of 5G installations; brought forward her concerns to the Secretary General and to other members of the committee. In her 5 minute speech of 2019 she reports her findings saying:

«Since December 2015 the staff here at the Vienna International Centre have been exposed to off the scale electromagnetic radiation (…), current public exposure levels are at least one quintillion, -that’s eighteen zeroes- above natural background radiation according to Professor Olle Johansson of the Karolinska institute in Sweden. The highly dangerous biological effects of EMFs have been documented by thousands of studies since 1932».

With respect to this fact, it is also worth pointing out that 5G operates at a frequency level of 60 gigahertz. More than a simple figure, this piece of data is relevant when talking about the technology’s impact on the environment and other forms of life as it is the specific point, to the decimal, at which frequencies become absorbable by oxygen.

Again, this is a fact which is not disputed, even by proponents of this innovative mode of telecommunication. And it is on the basis of this fact that the conspiracies correlating 5G technology with symptoms of Covid-19 have emerged. Clearly, deployment of a technology that has the potential to reduce available oxygen at a time when the world is wrestling with a contagious respiratory illness, is sensitive to say the least.

In terms of the environmental impact, there have been multiple sightings of dying vegetation and even reports of bees and birds seemingly dropping dead in areas where 5G infrastructures operate. Furthermore, various studies suggest these frequencies were causing necrosis in nearby vegetation as well as stress damage in wheat growth on a cellular level as shown in an Armenian study conducted as far back as 2016.

With this information in mind, one might enquire why these studies have not been the subject of much public debate, or why major scientific publications and figures have not taken the opportunity to discuss these potential dangers to the public and the planet. Unfortunately, as with everything else, when corporate interests are at stake, information can be ignored or even manipulated. This is true even in the realm of science. Indeed there are many documented cases of data being knowingly concealed, even in the face of serious public health issues, the most notable being the conscious shielding by the tobacco industry of the dangers of smoking, and the food industry concealing data on the dangers of processed sugars on human health.

5G and its governmental endorsement in France

Another interesting element with regards to the endorsement of 5G by public figures is that in the case of France, it is the Minister of Finance Bruno Lemaire who has been the latest to come out in support of the 5G rollout, going as far as referring to it as “essential” (Paris, 14/09/2020). When in reality his ministry does not possess the necessary competences nor the knowledge required to discuss the technical or health-related aspects of 5G in any serious capacity. As for the French Minister of Environment, Barbara Pompili, when asked where she stood on the topic, she simply answered:

“We have launched investigations with the ANSES (the national agency for public health with regards to energy and the environment) to look into the different disadvantages that may be brought about from a public health and enviromental perspective as it is part of my job. (…) but what I want first and foremost is that the internet be accessible in all of our territories” (Paris, 23/07/2020)

. As such prioritizing the access to the internet over the health of her constituents as well as the quality of the environment they inhabit, despite the ethical and professional responsibilties of her office regarding these issues.

Is health, the environment and our privacy the price to pay for omnipotent connectivity ?

Even with the concerns over privacy, health, or environmental issues, what is certain is that 5G will dramatically change the way the world operates. Whether it be for practical things such as remote surgeries, or ordering goods and services by uttering a simple key word, it is important to keep in mind that this degree of what is essentially omnipotent connectivity, comes at a price. Being automatically identified by cameras, or more worrying still, facing a potential health crisis, add to the increasing feeling of being alienated from nature as well the sentiment that we are interfering with its basic biological structure, which is what the research seems to indicate.

[2]: Valuetainement is an online media organisation created by Patrick Bet-David.

[3]: Radiations and radiofrequencies can cause genetical modifications which increase the risk of cancers as reported by the IARC (International Agency for Research on Cancer) which is a subset of the WHO (World Health Organisation) which classified raadiofrequencies as a “potential carcinogens for humans” (1 GHz or gigahertz is equal to 1000 MHz or megahertz, 1 MHz is equivalent to 1000 Khz or kilohertz and 1KHz is equal to 1000 Hz or hertz). The long term effects of radiations can also be observed in the areas struck by nuclear weapons in Japan, which still show abnormoly high rates of cancers to this day.