Naturalist walk in the park with François Moutou

It is not always necessary to go very far to enjoy spring. On April 18, 2022, we are two from the Tendua association to «explore» the Edmond de Rothschild park, equipped with binoculars and loaded with cameras, ready for a naturalist safari in the city!

Property of the Rothschild family 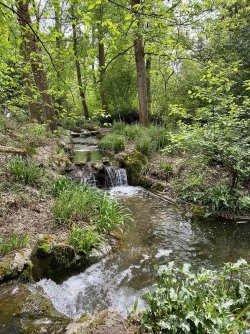 This park corresponds to the extension of the Bois de Boulogne, in the neighbouring town of Boulogne-Billancourt, separated from the Bois by the Boulevard Anatole France to the north and surrounded by the Normandy motorway to the south, the Seine to the west and the city to the east. With a surface area of 15ha, it is the largest park in Boulogne. The land became the property of the Rothschild family around 1850. A large Louis XIV-style house was built in 1856 and the park was enlarged to 30 ha. The connection of the A13 motorway to the ring road meant that it lost half of its surface area. The large historic family house is now sadly in ruins. The singularity of the park is due to its aspects: a landscaped park created around 1860, according to a Paxton project redesigned by M. Loyr; a Japanese garden created by a gardener named Hatta between 1900 and 1930, of which only remain, since its conception, the trees, originally nanified then having resumed their normal growth; the routin: a part of rockeries and basins created by M. Gaucher in 1924 and which shelters the river, called blue. With its artificial basin, false waterfalls, false rocks, false streams and a small Japanese bridge, the park nevertheless offers some real possibilities for naturalistic observations. Spring makes a mockery of gardeners and landscapers. 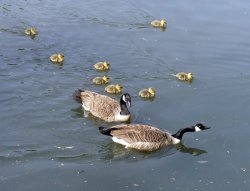 On the water, Canada geese have been established for a few years. They live with mallards and barred-headed geese, at least one couple of coots and one hen, residents. They are also visited by different birds of passage, depending on the season, such as large cormorants, black-headed gulls and one or two grey herons. There are fish in this pond; the big carp are active on sunny days. 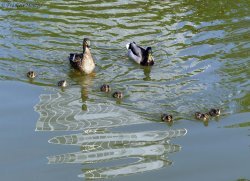 Everything seems calm because there are nests on the islet. As soon as one stops at the water’s edge, some geese and mallards approach gently, questioning. Clearly some biped visitors bring them food and it is known. We have nothing, they do not insist.

The calm is suddenly broken by a real spat between two pairs of geese. The argument escapes us but one of the jars was no longer laughing at all. Apparently the other birds and other species do not seem concerned or pretend not to look. 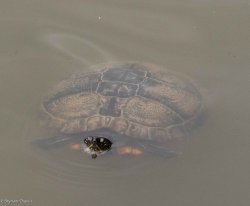 Turtles, coots and others Last year, a tree fell into the water and was left there. It is the delight of turtles (Trachemys, the so-called Florida aquatic turtle), which are introduced and become arboreal for the occasion. The trunks and branches now horizontal, close to the surface, make very good resting places to allow them to enjoy the spring sun in peace. The small branches of the houppier are also of interest to the world. At the beginning of spring a couple of Castaneous Grebes revolved around this tangle of plants on the water and I thought I saw them nesting. 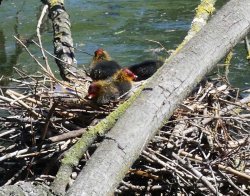 Mid-April it is a coot’s nest that sits in the emerged branches and I no longer see grebes. The first coot chick is spotted on May 7 in the nest under an adult. What a funny head! 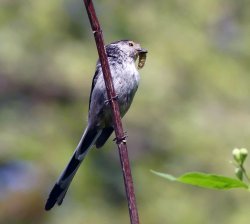 Long-tailed tit We are not there yet and on April 18 we are also looking for small passerines. In March, a pair of long-tailed tits built their nest in the dense crown of a shrub. In April, both parents feed. The nest is well hidden, there is no question of disturbing it. Watching adults back and forth from a discreet place is a beautiful sight. And we enjoy it. You can stand a few meters away and admire the birds at work. I came back several times. A few days later I see the adults who also see me and seem a bit surprised. After feeding the chicks well away from the twigs, they both came, right next to me “talking”. I don’t know what they were saying or who they were saying it to, but I really felt that they were talking to me, or talking about my presence. It was only then that they went to get the next meal that I saw them report, from a more direct flight than the previous one. Then I left them alone. The fledgling young quickly followed a few days later and the shrub was deserted. 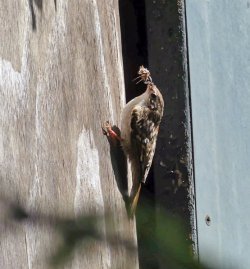 Short-toed Treecreeper At the end of the park there is an equestrian club with a few horses, boxes and a large outdoor carousel. An abandoned two-storey building is right next to the boxes. The windows are condemned and wooden panels have been installed next to the shutters. When we get close, we notice an activity in Avienne: a couple of Short-toed Treecreepers have set up their nest behind one of these wooden panels and the feeding of the young is going well. The birds are really small but their passages are predictable, which allows to observe them in good conditions and without disturbing them. At each passage, the adult enters with a well-stocked beak from which legs and antennae protrude, and comes out with a small whitish bag in the beak. The chicks fed swallow on one side and relieve on the other, which allows the parents to clean remove the droppings, naturally packed, and throw them out.

Other inhabitants of the undergrowth 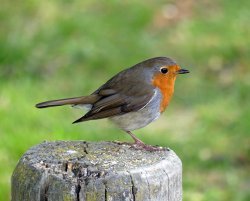 European Robins are quite numerous and their songs resound everywhere. Some singers agree to let themselves be photographed. When you look for them, you always tend to look too high in the trees. They are often perched quite low, not necessarily hidden but as soon as the leaves have arrived, finding them becomes more complicated. It’s a busy time. 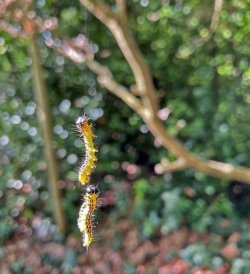 Swinging caterpillars
Some caterpillar species swing, allowing them to spread more quickly than walking on the tree where they were born - © François Moutou

During the visits in April and early May, it is easy to observe many small caterpillars suspended in the air by a long wire that descends them from the trees. Up to the ground? It could be the caterpillar of the box borer, harmless but severe for boxwood. There are also some cocoons of pine processionary (Thaumetopoea pityocampa) mothes in some large conifers. Some trunks are surrounded by a trap bag to recover the caterpillars thanks to chemical molecules.

We didn’t see the kingfisher on April 18, but I saw him again at the end of the month and again at the beginning of May. On May 1st, the bird swallows a fish almost as long as it, it is quite spectacular. On that day, two cormorants and a kingfisher were actively fishing in the same small portion of the water and appeared to be enjoying it. 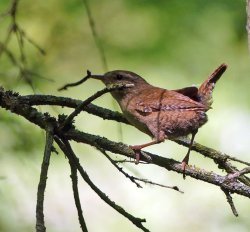 Wren with a caterpillar
© François Moutou

Coming down from the point of view (the Common Moorhen’s nest is still there and the parent at the nest is being fed by the other adult : well done!), I had to pass very close to a Wren’s nest that started to alarm. I did not search for the nest, too risky and I followed the adult. He found a caterpillar and went to feed its chicks : they should not be very big! 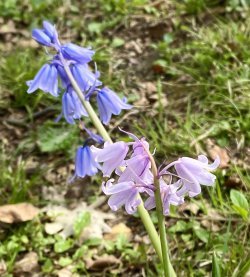 And there are still all the plants, from the smallest to the large trees planted more than a century ago. Carpets of hyacinths and daisies are spectacular in April. To the colors are added the scents and it is very pleasant. 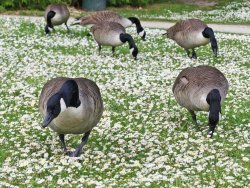 In April, we saw flowers of love-in-a-mist and Blue bugle, the Bear’s garlic in bloom, several species of small wild hyacinths: violets, roses, white. Depending on the season, flowers change, colors and perfumes too.

The park also has 16 trees classified as “remarkable” and many others that are also remarkable for all the work of absorbing our CO2 emissions that we emit without worrying about the consequences. 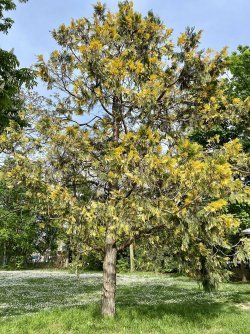 There is also the magnificent white cedar of California or California incense-cedar at the entrance of the park, whose colours are incredible at the beginning of spring. 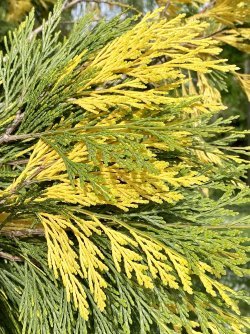 There is also this weeping Beech (Fagus sylvatica ’Pendula’) with a particularly gnarled trunk. Insect observations are not lacking either: bedbugs, sylphs, unidentified caterpillars. Grey snails have not yet arrived, probably on their way...

During this walk in April, we counted no less than fifteen animal species observed. And many buds on the trees and small flowers announcing the renewal of spring. It is a shame to see the gardening company, in charge of the maintenance of the park, cut down a dozen trees, some quite large, at the end of April, at the time of the rise of sap, flowering and nesting. Why not let spring live? Protecting nature, even in a park, often starts with not destroying it. 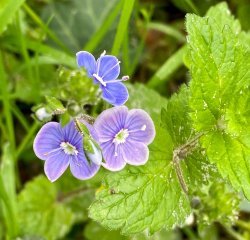 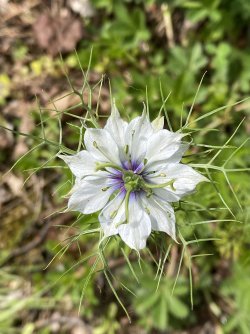 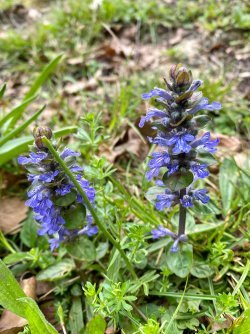 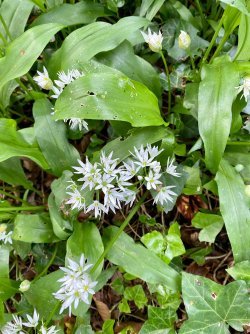 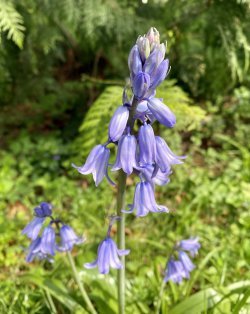 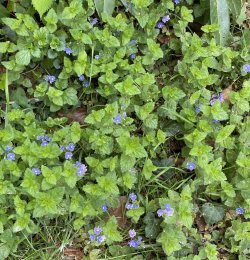 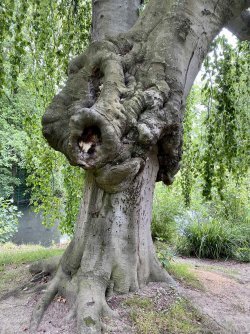