One year in the life of a pack of Wolves

The wolf is a carnivorous mammal whose sociability is well established, characterized by constant interaction with other individuals of its species. In the wild, wolves live in family groups, each family group consisting of an adult couple, young born in the year and young born the previous year, for a time, continue to live with their parents in the territory of the latter. The need to communicate with their peers is one of the strongest motivations in wolf behavior and plays a crucial role in the behavior and ecology of this species.

The most important part of the habitat of a wolf family is its center, the “key parcel” of the family space. The newly formed breeding pair chooses it and will transmit it to his descendants from generation to generation almost without change. It is here that we find the den, furnished by the female wolf to give birth to their young. Usually, the female wolf is preparing several dens she digs herself or badgers’ burrows she accomodates the way she wants. The choice to build dens or to use badger’s burrows depends on the experience of the female wolf and also on the specific weather conditions of spring. At the beginning of an early and warm spring, the female wolf prefers a den located on shaded slopes facing north with water sources at less than 50 m. 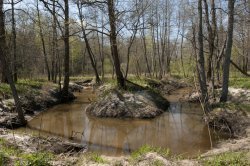 When the spring is cold and late, the female wolf prefer a dry and warm den, with a sunny platform at its entrance. A more experienced and mature female usually prefers comfort and chooses the den according to “microclimatic parameters,” while relying on her instincts to ensure the safety of the den. A younger female wolf, less experienced, however, will focus on safety and keep her cubs in the most remote and inconvenient as possible, but safe and inaccessible place.

As the cubs grow, their mother moves from one den to another one two or three times. She carries in her mouth a cub at a time, sometimes over a distance of several kilometers. Larger cubs spend their day outside, in remote areas of dead wood, at the edge of an abatis, in the rubble of stones, where they can take shelter, approach water, and where the playgrounds are in the sun. 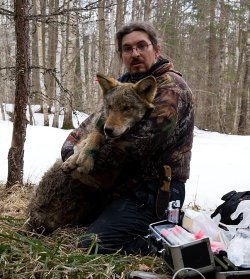 The male adult, first, is responsible for ensuring food by hunting around the den on the main hunting grounds of the family group. This part of the family plot is a vital space for young offspring and it is mainly used by the breeding pair. During this period, the female wolf controls the behavior of the male who tries all sorts of ways to please her, bringing her and cubs some food such as young boars, beavers, hares, deers. Lactating female usually does not leave her cubs very long, and does not depart from her offspring more than four kilometers. During the years when rodents are numerous, the female wolf hunts voles which constitute a significant addition to the diet of cubs. As they grow, the female wolf goes farther and farther away from her cubs, and she finally also gets to hunt prey for them.

One or two young of the previous year may participate in the hunt with the dominant male, but, usually, the female wolf does not allow their presence near the den until the cubs become stronger, i.e. until the end of the second and third months of life. In spring and summer, the young of the previous year occupy the periphery of the family plot, providing the maintenance of the integrity of its borders. In spring and early summer, “teenagers” really want to go back to the den, as if they knew a rebirth, rediscovering the nature’s stimuli that they experienced the previous year, while they themselves were growing-up cubs. The desire to return to the den to the Alpha pair that their parents are, in many respects guarantees the integrity of the family unit throughout the year.

In late summer the entire family begins to gather. The “last-borns” are going to reach about 5 months now and begin to move in the family plot, with adults and their older brothers. This is one of the most important periods in the life of young wolves. They leave the center of the family territory and they follow adults from a successfull hunting place to another one, gradually becoming familiar with all the hunting grounds of the group. With winter approaching, the wolves gather together in a single and consistent group. While participating in hunting with the adults and their older brothers, cubs are introduced to hunting habits of the pack and they receive a vital experience for food. In turn, the adult and experienced wolves, able to successfully hunt large herbivores, provide food to the young generation in harsh conditions of snowy winter. 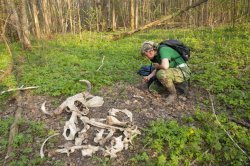 For travel related to hunting, wolves can travel 12 to 40 km per day, covering with their movements all the territory of the family. The surface of the territory occupied by a pack of wolves living in a forest area varies from 150 to 500 km2, depending on the density of their main preys such as ungulates. Wolves are well aware of ungulate species living on this or that part of their territory, of their physical conditions and they try only to hunt animals, whose capture is guaranteed with a minimum of effort.

The Ungulates in good physical shape are not of great interest to the wolves. Wolves are constantly monitoring their potential preys. They “verify” their preys’ status and their speed of reaction. When the strong and healthy animals notice the presence of the predators, they develop a sufficient escape velocity, and they are not pursued by wolves, that choose a weakened prey, that is lacking of insurance.

And again the spring: birth and separation

In spring, when the breeding pair is moving away from the pack towards the center of the family territory, and when the youngest remain at its periphery, an another very important social process then takes place in the group of wolves. It is the separation. Sometimes alone, sometimes in small groups, some subadult wolves leave the parental territory and they go in search of new spaces unoccupied by other families of wolves. Separation of young wolves is a key factor in maintaining the integrity of the wolf population in a large area. It is this separation of young people with the family group which allows the genetic diversity of wolves at a level sufficient for their survival, avoiding the “genetic drift”.

Different factors influence the decision “to leave the family” or “to stay”, such as social environment, personal relationships within the group, gender. Some wolves remain in the family throughout their lives, but others leave the pack at the age of 2-3 years. It is primarily young wolves that leave the family, unable to resist the pressure of competition and the dominant female, their mother. Initially, the candidates are psychologically weak animals who are not able to maintain an adequate level of social contacts, as well as small cohesive groups of young wolves, not communicating between them and having almost no contact with other members of the pack. In general, larger is the family, the more likely it is the pack is divided into small groups, and young wolves quickly leave the family. In European forests in Russia, the number of wolves in a family group can reach 15-18 individuals, but more commonly a pack does not exceed 10 to 11 wolves. 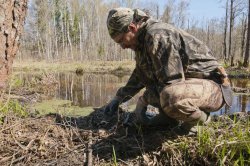 Why are there young wolves in a pack? What are the advantages accruing to adult wolves for the presence of young wolves ? Among specialists, biologists and ethologists, these issues are regularly discussed, but so far there is no single answer. One of the most important functions performed by the young wolves is that they ensure the maintenance of outer frontiers of the pack’s territory in the spring and summer, while adult wolves take care of pups. Another advantage of the presence of subadult wolves is to help adults during collective hunts, during which the young wolves act as “beaters”, until the prey is caught by an adult wolf. In addition, during the period when adults are occupied by the new scope, the young wolves are trying, mostly unsuccessfully, to hunt large prey to the periphery of the territory of the family and by their actions, they causes spatial redistribution of ungulates. In an effort to escape the constant pressure of young wolves, the ungulates move from the periphery of the territory to the center, towards the favorite hunting grounds of the dominant couple. Thus, young wolves, unknowingly, provide the influx of potential preys to feed the cubs.

However, if you try to play the life of a wolf pack throughout a year, then it is a complex system which appears to the observer, governed by many internal mechanisms, social interactions and biological processes that fits perfectly into the community represented by this pack. And understanding these subtleties and self-configuration of the system can not fail to arouse our admiration!

Original written by Dr J.A.Hernandez-Blanco and by E. Litvinova from the Russian Academy of Sciences