Oceans are in danger 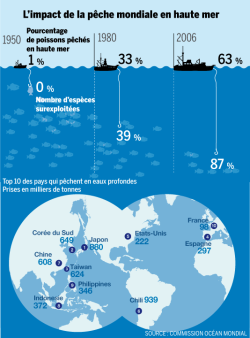 The impact of the global fishing in high seas
© Source le Monde, janvier 2015

The two-thirds of the oceans are a legal “No Man’s Land” , target of industrial lobbies, avid of underwater resources.

To read more : The UN makes an important step for the protection of the high seas

The global warming in 4 minutes-in French

97% of scientists working on climate change, estimate that the earth is warming rapidly as a result of human activities. The consequences of global warming are:

Grandmothers orcas, repositories of ecological knowledge, help the survival of their clan

A group of killer whales in British Columbia now has a new calf, J51, swimming alongside her mother, J19.
© Dave Ellifrit, Center for Whale Research

Among orcas, grandmothers are the queens of leadership and essential killers! “Postmenopausal females are a group of knowledgeable leaders, environmentally educated that help the younger members of their community to find food, especially during periods where prey is scarce,” says biologist Lauren Brett, Associate Research Fellow at the Centre for Research in Animal Behaviour, University of Exeter (Great Britain). 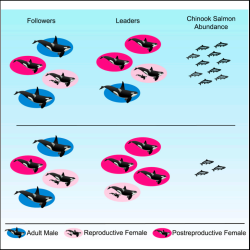 and also: Granny, also known as J2, is an orca, or killer whale, estimated by some whale researchers to be 104 years old, which, if correct, would make her the oldest known living orca. Granny had been captured with the rest of her pod in 1967 but was too old at that time for a marine mammal park, so was released. In 1967, Granny was estimated to have been born in 1911. Granny, along with several of her descendants, travels in the J pod, a group of about 25 orcas. J pod, along with Pods K and L, are the “J clan”, which is part of the southern resident killer whale population. They frequent the inland waters of British Columbia and Washington State in the summer months, but roam from southeast Alaska to central California. They have completed a journey as far as 800 miles in a week. The southern resident killer whales are the most studied population of killer whales in the world. Many whales in this population were captured in the 1960s and 1970s for use in sea parks, and others were killed by hunters attempting to capture them. “For an old orca, Granny likes to walk. She was spotted, with 25 members of his tribe, around 2 am, May 9, 2014, south of the Strait of Georgia by Simon Pidcock, Ocean EcoVentures. This means in particular that she had to travel nearly 1300 kilometers to reach the Canadian coast from southern California, where she was seen for the last time.”

The price of rhino horn has reached the 60,000 dollars per kilo, i.e. twice that of gold or platinum, and today has more value on the black market than diamonds or cocaine, ensures WWF.
© Source: le Monde, décembre 2014

With a turnover estimated at 19 billion dollars per year (14 billion euros), the illegal trafficking of wildlife - for medecine, zoos, new “pets”...- is coming just after the illegal drug trade, trafficking in human beings and counterfeit goods. Source: Le Monde- December 2014