The bill Biodiversity adopted by the French Senate

2016, January 26th, French Senators have adopted at about 90% of the valid votes the bill for the reconquest of the biodiversity. But how many of them were really present for this vote? The French Agency for the biodiversity will be created. Many other points in this law, but globally the more the decisions concern distant horizons, the less it is complicated to vote against. But, the Senators did not move forward on the ban on the deep fishing, nor on the use of some neonicotinoïdes pesticides, which the dangerousness for the health and the environment was confirmed by ANSES (French Agency for Food, Environmental and Occupationnel Health & Safety). Senators did not adopt the amendments to forbid the trapping with the birdlime or the hunting of mammals in period of reproduction. Actually this law is full of gars and nonsenses and has to be voted by the National Assembly in 2nd reading. Do French Senators really understand what is biodiversity? What shall we expect from French Deputies of the National Assembly? Sources : FNE, Courrier de la Nature n°295

The Mairie de Paris has announced a call for projects entitled “Paris-culteurs”, with the support of 33 charter signatories “Objective: 100 hectares”. Progress towards this goal will focus on 40 sites located across Paris and currently under identification - roofs, walls, at ground level or below - sites, which will be made available to green innovators for the development of urban agriculture and green space projects. This ambitious goal for Paris is to expand and develop green urban spaces and to create a new urban model, establishing as a goal the creation of 100 hectares of green roofs, green facades and walls by 2020, of which a third of this space will be devoted to urban agriculture. Mid-April, the list of 40 proposed sites will unveiled, together with the call for offer partners. Aeroponics, aquaponics, hydroponics, permaculture, orchards, mushroom cultivation, above or below ground, edible walls, vegetable roofs, climbing and descending plants, sedum terrace installations: all are options are available to the «Paris-culteurs» who may propose techniques involving any and all forms of urban gardening. The idea is good and green, but we would have appreciate to be part of it being simple citizens!

Pollution: Red Mud of the Creeks of Cassis, an old story …

Arsenic, uranium 238, thorium 232, mercury, cadmium, titanium, soda, lead, chromium, vanadium, nickel: the list is not exhaustive and these are only some components of the «red mud» that is poured every day by hundreds of tons in the Mediterranean Sea by the factory of alumina of Bouches-du-Rhône belonging today to the company Altéo. A pipe built in 1966 is rejecting this waste up to seven kilometers from the coast, to the heart of a remarkable biodiversity site, that became in April, 2012 the national park of the Creeks. In half a century, about thirty million tons were spread out at 250 meters deep. 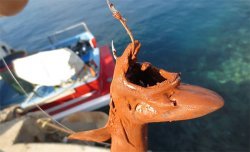 The fishermen raise up their nets tinged with red and with fishes charged in heavy metals. Certain species have totally disappeared. The « crime » was announced by the famous biologist Alain Bombard in 1963 at the time of the project of the pipe. Gérard Rivoire, a retired oceanographer, also worries about the radiological exposure : «The natural radioactivity of the Mediterranean Sea is 12 becquerels by liter; that of the muds at the release of the pipe exceeds 750 Bq / l. It is a major risk for the marine wildlife and for the food chain.»

However, the studies financed by Alteo seem to conclude in an “absence of notable impact of residues on the aquatic animals, including in strong depth”.

Nevertheless, French Government is “taking care” of us : by the order signed on December 28th, 2015, the Prefet of Les Bouches-du-Rhône, Stéphane Bouillon, authorizes Alteo to reject in the canyon of Cassidaigne, an ocean deep at seven kilometres of the coastline in the National park of Creeks, up to 270 m3 of the liquid effluents per hour. And he accepts, for a duration of six years, the overtaking of the values limit of emission fixed by European standards concerning six pollutants, mainly heavy metals, such arsenic (11 kg a day), iron (87 kg / day) and aluminum at the rate of 2 880 tons a year (that is 7,9 tons in the daytime!). 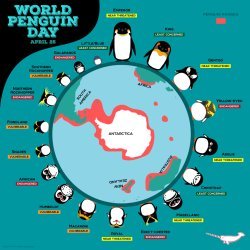 There are 18 species of penguins and all are found in the Southern Hemisphere*. If you ever wondered where penguins live in the world, this graphic is hère to help!

Their vestigial wings have become flippers, useless for flight in the air. In the water, however, penguins are astonishingly agile.

April 25th is World Penguin Day! The annual northward migration of penguins is on or around April 25th. Share and spread the word.

Galapagos Penguins are also found in the Southern Hemisphere, but the uppermost tip of their range crosses the equator. 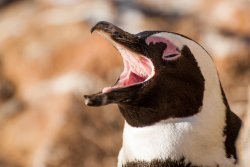 Fourteen of the 18 species are endangered, three are considered as “stable” and the state of one specie is not known. Penguin calls (vocalizations) are individually identifiable, allowing mates to recognize each other and also their chick.