TENDUA and the collective of associations CAP LOUP

TENDUA continues in the frame of the collective of associations CAP LOUP, its action in favour of the protection of wolves in France. What happened since January 2016?

January, 12th, 2016: in Lyon, about 3000 people have manifested to say NO to the killing of wolves in France. The day after, more than 400 gathered in Nice in favour of the presence of the wolf in France.

March, 7th, 2016: meeting with the scientific advisor of the French Minister of the Environment, M. Gilles Boeuf, We asked for the stopping of the killing of wolves and we presented our solutions in favour of cohabitation with wolves. Being a well-known scientist, Gilles Bœuf said he shared our finding and tha the wants to act in favour of wolves. He ensured that our demands would be transmitted to the Minister and to Barbara Pompili, the new State Secretary to biodiversity. The meeting was planned at the beginning of April but was finally reported because of « a too heavy agenda ».

April, 8th, 2016: meeting with Marie-Hélène Aubert, advisor for Environment to the President François Hollande. Our main proposals for a better cohabitation between wolves and farmers; Indemnify the breeders in case of predation only when the herds are correctly protected; verify on the ground the effective implementation of adapted means of protection; improve presently the subsidized means of protection; improve the technical accompaniment of the breeders; favor systematically the deployment of the protective measures of the herds in the zones of new colonization; develop the research for new methods. In conclusion, CAP LOUP seemed to have been understood …

CAP LOUP remains firmly opposed to the implementation of the policy of authorization of lethal shootings since the beginning of the « plan wolf for 2013-2017 », that encourages these shootings instead of guaranteeing that everything is made to avoid turning to it The first urgent request we made is that the project of decree for the additional shooting of 6 wolves for the period 2015-2016 is not implemented. TENDUA pronounced against the slaughter of wolves during the public consultation, which came to an end on March 4th of this year, as well as 90 % of the answers to this consultation (6000 participants). Unfortunately, besides the fact that citizens and experts are against the additional shooting, the French Minister of Environment authorized on April 25th the additional killing of 6 wolves with 3 successive decrees, each allowing the shooting of 2 wolves! However, the wolves’ French population is decreasing. Our associations attack these decisions made against a protected species that most of French people want to protect too To read more: http://www.cap-loup.fr/…/s-royal-...

On Reunion island: shark-killing, a way to make money ! 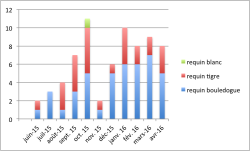 Since March, 5 more sharks were officially killed reaching to 72 slaughtered squales. The killing is increasing: 37 sharks have been killed in 3,5 months in 2016 against 35 sharks killed in 6 months in 2015.

The Fishing Regional Committee (CRPMEM), which is at the same time the initiator, coordinator, controller (but not responsible!) has estimated the provisional annual budget of the CAPREQUINS2 program to 747 553,70€ in June 2015 in order « to secure by fishing» the territory of the 6 communes of the 35km of the West coastline of the Reunion island. It is a golden price for hooks…

At the beginning of April, 2016 a complaint was deposited by the ASPAS and Sea Shepherd associations after the fishing and the slaughter on October 15th, 2015 of a great white shark in Reunion island within the framework of the program CAPREQUINS2.

The animal was attracted most probably by one of the numerous baits placed in the bay of Saint-Paul; it was fished and killed, at the only appreciation of the CRPMEM which is not authorized to take this type of decision. The IUCN lists the great white shark among the “vulnerable”, i.e. endangered species. This status led the European Union to forbid the fishing of the great white shark (Regulation (EU) 2015/104 of the Council of January 19th, 2015).

This migratory species is also registered on appendices I and II of the Bonn Convention on the preservation of the migratory species belonging to the wildlife of June 23rd, 1979, and to the appendix II of the Washington Convention on the international trade of the endangered wild species of fauna and flora of March 3rd, 1973. Numerous international conventions peculiar to certain geographical zones plan its protection in the world (Mediterranean Sea, Antarctica, South Africa, New Zealand). This fishing is as revolting as it is done within the framework of a fishing program that our associations never stop denouncing: nothing demonstrates that the fishing of bull sharks and tiger sharks is a solution to avoid the accidents in Reunion island waters; by attracting artificially sharks near coastline of Reunion island, this program can even turn out counterproductive; it is led without scientific protocol, and in total opacity. 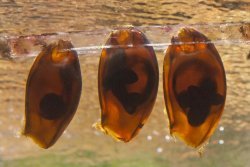 The nursehound (Scyliorhinus stellaris), also known as the large-spotted dogfish, greater spotted dogfish, or bull huss, is a species of catshark, found in the north-eastern Atlantic Ocean. The International Union for Conservation of Nature (IUCN) has assessed the nurse hound as Near Threatened, as its population in the Mediterranean Sea seems to have declined substantially from overfishing. Growing up to 1.6 m (5.2 ft) long, the nursehound has a robust body with a broad, rounded head and two dorsal fins placed far back.

TENDUA is following the project of Rays and Sharks’ Sanctuary at Fernando de Noronha Archipelago After the letter co-signed together with the Association “Sauvegarde des requins” in October 2015 to the State Secretary for Environment of the Pernambuco State, TENDUA addressed the Brazilian environmental associations that asked for support to their project of sanctuary. It seems that their proposal has been stucked somewhere at the District of the Archipelago of Fernando de Noronha. The involved associations still hope to move forward their project.

Contributions of TENDUA since beginning of 2016

February 2016 : illustration with a picture of TENDUA of the article of Marie Darrieussecq « la disparition des animaux » on the blog of Luce Lapin et copains March-April 2016: illustration of the article of Alain Hennepin on the « le tigre du Nord, fer de lance de l’avenir» with 2 pictures of the Amur tiger of TENDUA published in “le Courrier de la Nature n°295”. April 2016 : contribution to the magazine Goupil of the association ASPAS with an article about the killing of sharks on Reunion island.