France kills its wolves and mistreats its sheep

In France the livestock of sheep amounts to 7,2 million animals in 2014, against 9 millions in 2012, for 78840 breeding farms among which 20420 of more than 50 animals. These breeding farms are in decrease by their number (in particular the small exploitations), but their size remain superior to those of Italian or Spanish neighbours, with 500 up to 3000 sheep/farm. We are far from the idealized image of the shepherd giving a name to every new-bora lamb... The concentration of ovine races is unfortunately responsible for the loss in biodiversity resulting from the standing about and from the overgrazing of the herds, without counting the risk of transmission of the diseases (keratoconjonctivite, foot rot) to the wild populations of chamoises and ibexes, and the poisoning of the alpine lawns by avermectines, anti-parasitic, which sterilize the feces of animals.

Moreover, the reappearance since September, 2015 of the ovine catarrhal fever in 260 spots, is probably owed to the exchanges of cattle; 27 000 breeding farms were affected in 2008. In 2016, vaccines for 1,1 million animals are in the course of distribution by the French Ministry of Agriculture. A big “crisis” for the ovine sector is to plan this year (2016), and the cost of this crisis will be one more time supported by the tax-payers. This sector thus seems very sick and the figures of consumption of ovine meat confirm this trend: 29 % of reduction between 1990 and 2013. 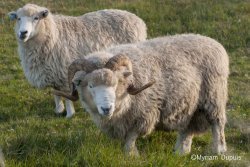 The French consumer admits his disenchantment for the « Sunday leg of lamb" ; the ovine meat represents only a little more than 3 % of the total consumption of meat in France, that is 1,5 % for the ovine meat of French origin.

Nevertheless, in 2014, 840 000 sheep were sent to the knackery by the breeders, among which 339 734 ewes were declared “unprofitable”. A part of these ewes are « reformed animals", bought every year from the breeders by the State with public money. A part is intended for the knackery: burned with some oil, to be transformed into flours of meat and bone, the use of which in ground breeding is forbidden since 2000. Thèse fleurs are stored in sheds, then cremated in cement plants, thanks to public money.

The part of national and European subsidies to the ovine sector is huge. Indeed, it is estimated that more than 50 % of the sheep breeders’ income are coming from subsidies (sheep intended for the butcher). Economically it is more serious than what the golf’s expenses can represent. Besides the “reformed sheep”, approximately 400.000 sheep die further to diseases such as those mentioned, but also victims of the lightning, rock movings and dogs’ attacks, figures of which are remaining rather confidentiel. On the other hand, the breeders impute the death of 9000 sheep to the wolf; what, in France, activates the payment of subsidies, even though the herd is not protected.

Since the wolf is back to France through the National park of Mercantour in 1992, its estimated population at the end of March 2016 is 236 individuals, after the killing of 46 wolves due to the ministériel decree of Ségolène Royal setting a « ceiling », - a maximum number of wolves that can be shot down in France for the current year (July 15-June 16) -, to 36 animals, without any scientific reason.  Why in this case, did 46 wolves die since July, 2015? Because certain animals are not quite simply “deducted” from this ceiling: 35 wolves were “hunted” within the framework of the decree, 2 poached (not deducted), 6 killed “in a accidental way” (not deducted), 1 case of mortality not clarified (not deducted), 2 cases of mortality possibly natural (not deducted).

So, the French Minister of Ecology wishes to set up a new decree for the additional shooting of 6 wolves this season, listening to the lobbies of certain breeders and hunters that recommend to kill wolf cubs in the den.

But killing these animals will not solve the structural problems of the French ovine sector. Is the Government looking for solutions or searching for votes to the coming elections ? The wolf is a protected species in Europe with the Berne Convention (1979) that has been transcribed into French law in 1989; the wolf is also protected in France by the ministerial decree of 1993/07/22 updated on 2007/07/23 and registered to Annexes II and IV of the Directive Habitats Faune Flore of the European Union (92/43/CEE), as a prioritary species. It means that France shall ensure the conservation of the species and its habitats. And France fails to its mission. The wolf is charged of proliferation: it is just not credible. A super-predator never proliferates otherwise it would put in danger his populations-preys and thus itself. Besides, we know so from now on that the wolf is as well a regulator for sic animals as a protector of the entire ecosystem where it lives. Then, isn’t the French wolf just an easy billy-goat of a stricken ovine sector? Nevertheless, you cannot bring down a fever by breaking the thermometre!