SHARKS AND MEN : MYTHS AND REALITY 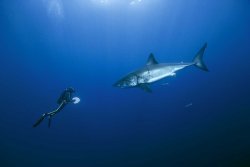 Between 1990 and 2005: 869 cases of attacks of shark were recorded in the world, among which, 94 were fatal, that is approximately one person in ten. Fifteen years later, we notice that the average number of shark attacks in the world is of the order of 35 a year, and that the number of persons who directly died from attacks is less than four a year.

As a comparison, the number of sharks killed annually in the world was estimated in the 1990s as at least 100 million individuals and maintaining this number amounts officially to 150 million sharks exterminated a year.

Besides overfishing, a late sexual maturity and a particularly long duration of the gestation, as well as a poor production of embryos make sharks particularly vulnerable.

CONSEQUENCES: THIRTY SPECIES ARE CONSIDERED AS ENDANGERED, AMONG WHICH 13 ARE CONSIDERED IN CRITICAL DANGER OF EXTINCTION, 8 ENDENGERED SPECIES AND 9 CLASSIFIED AS VULNERABLE, ACCORDING TO THE 2008 IUCN LIST. 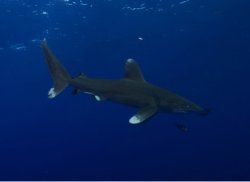 MAKE SURE OF THE EXPERTISE OF YOUR GUIDE, his knowledge of the site, for the season, and the sealife you may encounter during your dive.

PREPARE YOUR DIVE The safety of a diver decreases with decreasing visibility, increasing depth, the presence of more or less strong currents, load of the diver (cameras, etc) and the number of sharks in the dive zone. Remember that the ocean and the sea, which surround you are more dangerous than the sharks. Prepare and plan your dives with all the divers well before undertaking the dive.

BEHAVE PROPERLY During the launch, if you locate sharks and decide to dive, enter the water slowly, paying attention not to make too much noise. Noisy launches, creating disturbances in the water can incite the sharks and make them dangerous. Behave as a “polite” guest having “good manners”: during your dive you are the host of the sharks, masters of places and predators. Let any shark approach and allow it “to get acquainted” as it pleases it. Do not touch the sharks, do not be aggressive: the shark is a wild animal, which only obeys its instinct and will try to defend itself if it feels threatened. (In all probability, if you behave in an aggressive way, the shark will leave and will not try to attack you, but it is better not to try to experiment with this).

AVOID LOSING YOUR GLANCE FROM THE SHARK It is very important that you do not lose sight of the sharks that surround you. Remain very watchful after the (visible) departure of the sharks.

BE CAREFUL WITH YOUR MOVEMENTS Remain immovable, rather near the bottom. Try to become one with the relief and the topography, which surround you. Abrupt or fast movements can frighten sharks, make them nervous and even provoke defensive attacks.

AVOID BEING ISOLATED FROM THE GROUP The sharks often seem to perceive groupings of divers as a completely terrible super-body. Remain grouped, close to your body diver and remain watchful of the movements of the sharks, which surround you.

DO NOT FEED THE SHARKS The fact of feeding the sharks changes their behaviour radically: it can confusen environment of competition between them, making them very aggressive and thus very dangerous for the divers.

CAREFULLY OBSERVE THE SHARKS’ BEHAVIOR You have to leave the water at once if the sharks become nervous or agitated. A nervous shark is characterized by muddled, jerky and nervous movements, dorsal fins pointing downward, abrupt changes of direction, increased muscular tensions, nervous movements of the tail … If you do not want or you cannot leave the water, slowly increase the distance between the sharks and you, this could make them less agitated, and allow you to leave as quietly as possible.

BE ATTENTIVE TO THE BEHAVIOR OF FISHES AND FAUNA AROUND YOU If fishes and submarine fauna that are around you become nervous and their movements erratic, it can mean that a predator is hunting. Trust your diver’s instincts, if you “are not quiet” carefully leave the water as soon as possible.

IF YOU HAVE TO SURFACE IN THE PRESENCE OF SHARKS Move without haste. Never take your eyes off the sharks. If necessary, use a snorkel, camera, knife... to keep the shark away. Go directly your point of exit. Avoid swimming long distances on the surface, it could tire you and leave you vulnerable to an attack from a shark from either behind or below you. When you reach your exit point (boat, dock, beach...) leave the water quickly, but smoothly, otherwise you could arouse the curiosity and predator instincts of sharks.

Take the time to inform yourself about the possible implementation of practices such as chumming* [1] or feeding, which are often practised to attract the sharks - in spite of local regulations, safety must remain the absolute priority. Do not behave like a prey, nor as an aggressor. The wearing of a wetsuit is an effective protection allowing you to isolate your skin in case of contact. Avoid wearing the yellow colour, which seems to attract certain species of sharks able to perceive bright colours (as the great white shark).

WARNING on using of your camera flas: the light of the flash can provoke an aggressive reaction from sharks (risking bites).

Take advantage of these moments with a shark because it may not be readily repeated, considering the threats to survival of this predator, and you will never the encounter. Besides, it will give you an opportunity to recount your experience at your next family gathering, with your friends or at your workplace.

We thank you for your attention, and we wish you good dives, with magnificient encounters and beautiful images … and above all be aware!

[1] The chumming consists of attracting sharks by pouring a liquid mixture of fish oil and blood into the sea. Feeding consists in putting bait in the sea to attract sharks.