About 500 species are endangered : the threats 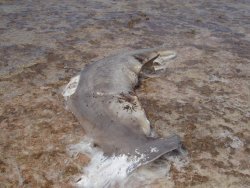 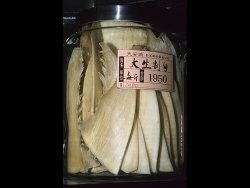 Jar of shark fins
All over the world, poachers practice finning and a “mafia of fins” now exists, dealing second only in value to the worlds drug trade... - © Y. Lefèvre

Shark ‘finning’ consists of fishing for sharks by cutting off their fins. The rest of the dying body is thrown back into the sea. Without fins to swim and thus conversion to oxygen, and considering the bleeding resulting from this fishing, the shark will inevitably die. This practice results in considerable waste as only 3 to 5 % of the mass of the shark is utilised. The body of the shark, with its high amount of urea, contaminates the other fish and a separate onboard storage would be necessary and of low profit.

The fishing in itself is not very costly and a pound of fins can be sold for up to US$200. Only the fins are exploited, leading to real massacres at sea and putting these ecosystems in danger.

Finning is certainly the most important cause in the decline of the worlds population of sharks. It convinced the United States in 2000 to legislate to forbid this practice in American waters. Europe confirmed the same legislation in 2003. However, even if France did not ask for it, dispensations are granted to the fishermen, in particular by Spain, for about 200 boats which are allowed to fish for sharks’ fins. 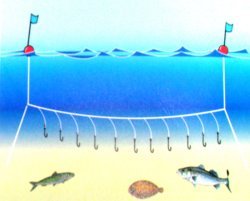 This is a real trap for any marine surface or moderate depth fish. Long liners are gigantic fishing lines, sometimes measuring several hundreds of kilometers in length. These lines are set with baited fishhooks every 3m approximately. They are then unwound following the boats which leave them be lying in the sea before reeling them in. Very few fish species interest the fishermen and the great majority of the fish are rejected and thrown back into the sea, mostly already dead (fish, sharks, tortoises, cetaceans, pinnipeds, birds). They are all the victims of the accidental fishing.

Fishing with long liners is forbidden in numerous countries but poachers continue to practice it. Inquire about the origin of the fish that you eat, because buying fish resulting from long liners guarantees them their business, without taking into account the life of the ecosystems.

Schematic of drift nets
Drift nets normally range in length from 25m to 4Km. Nets of up to 50 km have been set in recent times - © Internet Source 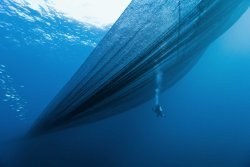 This kind of nets is used in the South Pacific ocean and Indian ocean by long liners fishing for tunas and other pelagic and demersal species as sardines, sea bass, mackerels, herrings - © P. Kobeh 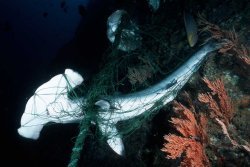 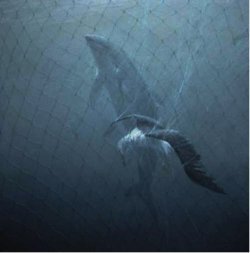 The pelagic drift nets are wide and long straight nets (in a single tablecloth-like shape) left temporarily drifting at sea by the fishermen.

They are used in the South Pacific by the Asian fishermen to fish for the tuna and in other places to fish for pelagic and demersal species such as sardine, seabass, mackerel, herring. But this technique captures all sorts of non-target species among which are dolphins, whales and tortoises: more than 300 000 cetaceans are victims of these nets every year. The Wellington convention of 1989 forbade the use of drift nets of more than 2.5 km in the Pacific. Japan then stopped fishing with drift nets in 1992.

Nets generate direct environmental impacts (overfishing) or indirect (fish taken accidentally). Even fragile or modest nets can capture and trap big species of cetaceans, or sharks. Since the 1980’s researches are investigating the means to reduce their impact. We may wonder about the fact that nothing good appears to have been found after 30 years of research...

Drift nets lost offshore (following storms or after collision with big cetacean, cargo boats, submarines, etc.), also called “ghost nets”, can become macro-wastes. A long time after their loss, they can continue to trap fish or other animals. They are solidly made and with little degradable synthetic material (nylon) and as with any on-surface floating object it attracts fish. Some of these “ghosts nets” hang onto reefs or on wrecks which then become traps for numerous marine animals. Others, are more or less torn up by the sea or the screws of ships are eventually washed up in the tide. Small pieces of nets, covered with eggs laid by fish or other marine bodies can be ingested by sea birds (albatros, ...).

For information, the South African department, involved (theoretically) in the protection of sharks, was planning to install, for the Football Word Cup 2010, “protection nets” – with huge hooks every 3 or 5 metres along the Durban coast for 5km length to avoid any “shark attacks”. The net is installed at 2m depth and is 6m deep; fish baits are hooked and attract the sharks that die on these hooks. But, these sharks would probably never venture there if there were no prey on the hooks… Out of interest, and no shark attacks have been recorded for years, what could then be the justification for this strategy?

These South African nets have killed more than 35,000 animals (sharks, dolphins, whale sharks, turtles and so on) between 1970 and 2000, without taking into account all those who were not born from these dead parents.

The main fisheries of sharks

Ask where and how the fish you are going to buy was caught, either in the fish shop or in the restaurant. It may help if people are more conscious and feel more concerned about this question.

The disappearance of prey

Because of overfishing and of the degradation of the oceans, the disappearance of prey is also a threat on the future of sharks.

An indispensable link of the trophic chain

The shark is situated at the top of the food chain; its predator’s role is essential for the balance of the oceans. He is the the oldest super-predator on Earth today...

How to help preservation?