Sharks have a very acute sense of hearing

Situated on both sides by the brain and connected to the side line, the internal ear is not only the auditory organ, it is also the organ for the balance, orientation and coordination.

The shark has much finer hearing than human beings and it is all the more advantageous as in the water the sound propagates 5 times faster than in air (1500m/s). Covered with numerous ciliate cells identical to those of the lateral line, the internal ear sends to the brain very low frequencies waves passed on by the water at the speed of 1500m/s within the range of 10Hz to 1000Hz. (Frequency band for humans is 25Hz to 16000Hz). Sharks may track sounds over many miles, listening specifically for distress sounds from wounded prey.

For information, the active detection sonars of super-silent submarines are situated in the 2000Hz band.

Taste is achieved by a myriad of sensory buds: papillae similar to ours and spread not only on the tongue, but also on the lips, the palate, the pharynx, and on the wall of the oeasophagus. These diverse receptors explain why sharks often reject a piece of ‘food’, once three quarter swallowed by mistake, after an ‘investigative bite’. The sensitive taste buds clustered in the mouth analyse the potential meal to see if it’s palatable. Sharks will often reject prey that is outside their ordinary diet (such as human beings).

The main chemical receivers are the ones for the sense of smell. Sharks are often called the “nose of the sea”.

As the shark moves, water flows through two forward facing nostrils, positioned along the sides of the snout. The water enters the nasal passage and moves past folds of skin covered with sensory cells. The twin nasal cavities act something like your two ears: Smell coming from the left of the shark will arrive at the left cavity just before it arrives at the right cavity. In this way, a shark can figure out where a smell is coming from and head in that direction. Their olfactory center occupies two thirds of their brain. They can detect a tiny quantity of olfactive particles diluted in a large quantity of water. A great white shark, for example, would be able to detect a single drop of blood in an Olympic-size pool. Most sharks can detect blood and animal odors from many miles away. It is very useful in the quest of food or sexual partner. Note: In sharks, taste and sense of smell are not connected, contrary to what occurs in human beings. 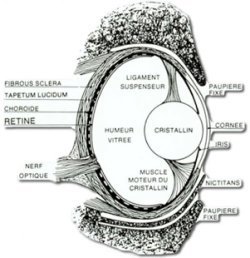 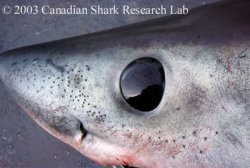 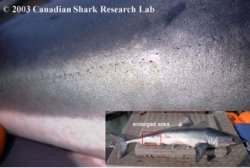 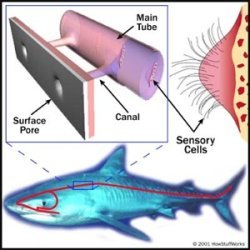 Ampullae and lateral line
Water flows through the lateral line systems. Vibrations in the water stimulate sensory cells (neuromasts) in the main tube, preventing the shark to the proximity of predators or prey - © Internet Source

Night-vision has no secrets for sharks.

Sharks posses the basic eye structure that is found in all vertebrates, but with some modification. The tapetum lucidum is a layer of reflecting, guanophores cells, behind the retina, acting as mirrors by reflecting back onto the sensory cells 90 % of the light, which touches them. This effectively boosts the visual signal, especially in low light levels giving sharks high visual acuity.

In addition to these familiar senses, sharks also possess some senses we don’t fully understand.

The electro-sensory system: the ampullae of Lorenzini and the lateral line

The lateral line, together with the ampullae of Lorenzini comprises the electro sensory component of the sharks sensory system (detections from 1.05 to 0.05 microvolts/centimetre).

The head of the shark (nose and rostrum) is stuffed with ampullae of Lorenzini, which consist of small clusters of electrically sensitive receptor cells positioned under the skin in the shark’s head. They detect low electric currents and their direction, produced by every living being.

Every living organism, even stationary, emits an electric field (cardiac beats, contraction of muscles). A fish hidden in a crevice will automatically be located. They thus serve:

The lateral line allows the shark to orient towards particular movement or sound. It is a nervous canal, filled with mucus, connecting small pores at the bottom of which extreme precision sensors are located. These structures are called neuromasts. Similar to the ampullae of Lorenzini, the neuromasts open to the outside through pores and detect the movement of prey.

Basically it is a set of tubes just under the shark’s skin. The two main tubes run on both sides of the body, from the shark’s head all the way to its tail. Water flows into these main tubes through pores on the skin’s surface. The insides of the main tubes are lined with hair-like protrusions, which are connected to neuromasts.

These cells are sensitive to the low frequency waves of pressure (imperceptible to the human ear): when a vibration propagates in the water, it hits the shark’s lateral line (a role similar to sonar). Everything that moves produces vibrations, which propagate through the water. The frequency of the vibrations depends on the size and on the health of the transmitter. They also register the variations of pressure of the water and of the temperature, which indicates depth and allows the shark to orient itself in 3 dimensions.

Scientists still don’t yet understand everything about these ampullary organs, but they do know the sensors let sharks “see” the weak electrical fields generated by living organisms. The range of electrosense seems to be fairly limited — a few feet in front of the shark’s nose — but this is enough to seek out fish and other prey hiding on the ocean floor. => Very usefull for orientation, hunting and during the mating period.

Special care to photographers and cameramen: the electric field scattered by equipment attracts sharks that come into contact.