On Saturday, April 3rd: meeting in the Park of Thoiry for a conference on Cheetahs

Laurie Marker, co-founder and executive director of the Cheetah Preservation Fund (www.cheetah.org ) returns soon to France for an exceptional visit to the Zoo of Thoiry (http: // www.thoiry.net) and will give a conference there on Saturday, April 3rd, 2010 at 4:30 pm.

She will outline the threats which threaten the survival of cheetahs and the actions undertaken by the Cheetah Conservation Fund for the protection of this species. Thoiry also plans to dedicate a special space to cheetahs during the weekend of Easter. This space will be situated on the preservation stand in the middle of the park.

Note this date in your diaries. TENDUA will be there and will meet the association Feline Friends which passed on to us this information.

Photographic Exhibition and testimonies of Nature with this 2nd edition Tony Crocetta, Eric Dragesco, Frank Renard, Jean-Christophe Vincent, Laurent Geslin, Louis Marie Preau, Michel Loup, Christine and Frank Dziubak are among the best specialists of French and international animal photography. They expose all in Drancy within the framework of the second edition of “Latitudes Animales”, together with numerous partners of the Biosphoto agency.

49 big size editions, realised by the laboratory Rainbow Color (a member of TENDUA), will be presented in an original scenography organised by the services of the cultural area of Drancy: the opportunity to think about the fragility of the worlds biodiversity and about the new environmental stakes. For the program of the exhibition, the conferences, the slide shows, the stands, etc. …: http://www.latitudes-animales.com/

The Bay of Somme is recognised on the international stage for its ecological wealth; it is considered in particular as the ornithological Mecca. Its big variety of landscapes and its low urbanisation offer favourable conditions to welcome migratory and non-migratory birds.

About 340 species of birds were listed in the bay during the last two centuries.

The bay is the first large natural French site on the migration path for birds on the way toward their wintering territories in the warm countries.

Rainbow Color will also be there. http://www.festival-oiseau-nature.com/ 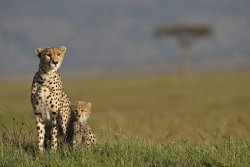 A baby cheetah and his mum
© T. Crocetta 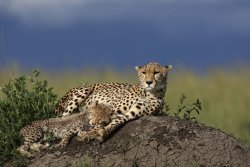 So as not to fail in our presentations of ‘animal babies’, here are two photos taken last February by Tony Crocetta, directly from Masaï Mara in Kenya: a baby cheetah and his mum, just so that we can dream about what wildlife should be...

According to the last information, both are going well. But it is necessary to remind ourselves of the fragility of this beautiful animal: with sometimes numerous litters, few young survive and the cheetah is in a great danger of extinction… Thanks to Tony for these very beautiful images.

We hope that you appreciated this edition of our Newsletter. We wish you a wonderful spring!