2010: The year of the TIGER, strength, courage, determination... but highly threatened of extinction 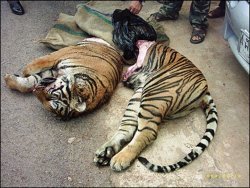 The optimistic estimations of the Bengal Tiger living in its natural environment equated to 2600 individuals in 2007 but were returned to 1200 animals in 2008, which is less than the number of tigers that had been counted in 1973 - which had started the Indian program for protection of the tiger, launched by Indira Gandhi.

Estimations of the Amur Tiger is currently around 300 individuals in the Russian Far East.

Concerning the Tiger of the Mekong (Laos, Cambodia, Thailand, Myanmar, Vietnam), the population count is less than 350 specimens (there were 1200 in 1998).

The “States of the Tiger” are Bangladesh, Bhutan, Cambodia, China, India, Indonesia, Laos, Malaysia, Myanmar, Nepal, Russia, Thailand and Vietnam. In all these countries, one of the main causes of the decline in the population is connected to poaching either for the needs of the Chinese pharmacopoeia, or for trophies.

The other big issue which threatens the Tiger is the destruction of its natural living environment (deforestation, agricultural activity, urbanisation) and the fragmentation of this living environment, due to the development of modern infrastructures.

If the international estimations of 3200 tigers living in their natural world today – compared with 6000 ten years ago - on barely 7 % of their natural environment, it is very likely that in reality the total population does not exceed 2500 animals.

Will there still be wild tigers in 2022, the next year of the Tiger? TENDUA is preparing a more complete report, which you will find on our website in the coming weeks. Do not hesitate to send us any recent information which you are aware of on this big feline family. Thank you.

A new species of big cat discovered in Borneo 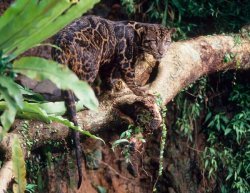 Neofelis diardi
In 2010, the first photos in the wild made by In. Wilting and Mohamed Azlan during the fortuitous meeting with a non elusive wild specimen - © A. Wilting & M. Azlan

In Malaysia, in Borneo’s Sabah state, scientists discovered at 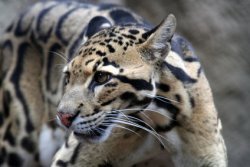 night, in the Dermakot Forest Reserve, a 500 square kilometre (190 square mile) area which had been commercially logged but where replanting is now under way, a leopard quite recently identified and filmed for the first time. The length of the feline, including its tail, reaches approximately 3 meters and it weighs about 40 kilos. It is called the Sundaland clouded leopard (Neofelis diardi) and classified as a new species, as well as endangered, by the International Union for the Conservation of Nature.

This Leopard seems to be the biggest predator in Borneo. Previously all clouded Leopards living across the Southeast Asian mainland were thought to be the same species. As a fact, the animal is not without reminding the nebulose Panther (Neofelis nebulosa, called also in French “the longibande panther”) who lives in Southeast Asia. These two species were not differentiated until 2007 but DNA tests allowed genetic differences to be established, classifying the clouded Leopard of Borneo a different species. This big cat can be found in lowland rainforest in Borneo and in small numbers in areas of logged forest.

But environmentalists say that the clouded Leopard faces the threat of poaching while rapid deforestation and the creation of rubber and oil-palm plantations in Borneo is destroying its natural habitat. Sixty camera traps placed in Dermakot also captured images of the marbled cat, flat-headed cat, leopard cat and Borneo bay cat, all smaller in size than the Sundaland clouded leopard.

The number of zoological and botanical new species described every year varies considerably. Between 1978 and 1987 twenty six mammals were discovered as well as 231 fish species. At the same time, one species per thousand disappears every year.

At the end of January 2010, the Environment committee of the European Parliament pronounced in favour of the ban on the international trade in bluefin tuna. This vote has only a consultative value but the ban allows considering the inscription of the bluefin tuna to appendix 1 of the CITES which is going to hold its 15th session Conference of the Parties in Doha (Qatar) from March, 13th until 25th 2010.

As for France, the country pronounced after Italy at the beginning of last February. However, by looking at it closer, its support remains conditional on 3 terms:

We can wonder if the bluefin tuna will not have disappeared when these measures will finally be applied, and regret the way France presents its choices as being “a political will to treat carefully the Mediterranean states”. If, during the Conference in Doha, two thirds of the 175 member states of CITES vote for, then the bluefin tuna will be registered in the Appendix 1, but the lobbying of the bluefin tuna consumer countries have made good progress with smaller states who are influenced by ‘economic partnerships’.

The consumption of bluefin tuna widely exceeds Japanese borders. If Japan absorbs 80% of the world production today, sushis, sashimis and the other tuna steaks have entered our everyday life, in France, in all Europe, in Russia - and not only in the capitals.

[1] ICCAT : International Committee for the Preservation of Thonidae of the Atlantic Ocean