Source SLT – Feb.06th, 2013 Kyrgyzstan’s snow leopards will have a larger, safer home! The country’s Prime Minister, Jantoro Satybaldiev, has signed a decree expanding the Sarychat-Ertash State Nature Reserve, Kyrgyzstan’s most important snow leopard habitat, by 150 square kilometres. That’s roughly twice the size of Manhattan – an expansion of 12%! The protected State Nature Reserve of Sarychat-Ertash is Kyrgyzstan’s prime snow leopard habitat. However, with the Reserve’s borders being somewhat undefined, mining and hunting interests have increasingly posed a threat to the cat’s safety in recent years. Recently, the Snow Leopard Trust collaborated with the Snow Leopard Network (SLN), World Wide Fund for Nature (WWF), the Human Development Center “Tree of Life” and other local NGOs to express actively their concern about geological explorations initiated in the Koyondu Valley, inside the Sarychat-Ertash Reserve’s buffer zone. 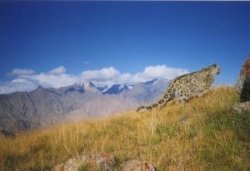 The joint efforts helped to reach out to the Kyrgyz Parliament to demonstrate the importance of this area for snow leopard conservation.

Following the joint presentations and a visit to the Koyondu Valley led by experts, including the Snow Leopard Trust’s Kyrgyzstan Program Coordinator, Kuban Jumabaev; the Kyrgyz Parliament cancelled all previously issued mining exploration licenses inside the park, thus effectively enlarging the protected area by 150 square kilometers. Geological explorations inside the reserve have since been stopped. The government has now officially approved the new, larger protected area: through the decision by the Kyrgyz Government № 48 from February 1, 2013, “On the approval of the new borders of the Sarychat-Ertash State Nature Reserve”, the border of the reserve has been officially established. The Prime Minister of the Kyrgyz Republic, Jantoro Satybaldiev, placed the last missing signature on the official document during the first week of February 2013. 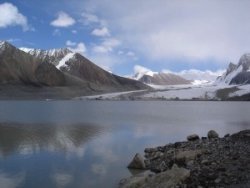 According to the new document, the size of the Sarychat-Ertash State Nature Reserve is now 149,117.9 hectares (ie. 1500 km2). Previous documents had listed the size of the reserve at 134,140 hectares. A State Certificate of the Reserve will be issued soon, showing the protected area’s exact borders. Neither mining nor hunting will be allowed within those borders. Let’s hope that the reserve will have the necessary means of control to prevent any poaching…

As the country’s largest protected area, the Sarychat-Ertash State Nature Reserve plays a crucial role in the cat’s long-term future in Kyrgyzstan. Located in the Central Tien-Shan, it protects habitats of the snow leopard and its prey species, such as argali (Ovis ammon), ibex (Capra ibex), marmot (Marmota baibacina) and other rare species. The new expansion covers an important migration and breeding area for the argali, one of the snow leopards’ primary prey species in Kyrgyzstan.

Source : le Monde, 02/19/13 AREVA once had big plans for the Northern territory of Australia: the mining of 14 000 tons uranium deposit estimated at about 2 billion dollars. But this time, financial interests did not prevail … The uranium-rich mining lease Koongarra (a 12,5 square kilometre deposit) was excluded from the Kakadu National Park when the conservation area was established in the late 1970s. Consequently, it had no legal protection. The value of the uranium there has been estimated to be more than $5 billion. Areva held exploration licences for this deposit. Senior Traditional Owner Jeffrey Lee fought with his community and finally obtained a UNESCO World Heritage classification for his land in 2012. The Koongarra area has now been added to the park lease and will soon be formally proclaimed part of Kakadu National Park. Koongarra is safe from uranium mining. 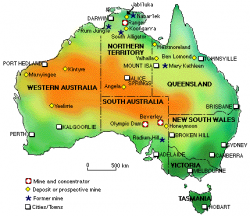 The Age newspaper reported that: “French energy giant Areva formally requested that Koongarra’s nominating be removed from the meeting’s agenda.” [Australian delegation and UNESCO World Heritage Committee meeting]. Mr Lee had been under “enormous pressure ... for a long time” to change his mind about including the land in Kakadu, according to the report. He could have become “the richest man of Australia” if he had surrendered. “It is reasonable to estimate that Areva’s offers were tainted with corruption, not necessarily from a legal angle, but certainly on a moral one”, accused the Nuclear Observatory.

Jeffrey Lee said to the Australien newspaper The Age: “I am not interested by what the Whites can offer me”, and he is “not interested by money. I have a job. I can buy food, I can go fishing and hunting“. On the Environment News Service website, he added : ”I have said no to uranium mining at Koongarra because I believe that the land and my cultural beliefs are more important than mining and money. Money comes and goes, but the land is always here, it always stays if we look after it and it will look after us”.

After 34 years of campaigning to keep uranium mining out of his ancestral land of Koongarra, Djok Senior Traditional Owner Jeffrey Lee sat in the House of Representatives on Feb. 6th to watch this land be protected forever.