Source : HEPCA Divers found a dead dugong in the Red Sea off the coast of Egypt end of November 2012, according to the environmental advocacy group HEPCA. Immediately after Colona Dive Center alerted HEPCA about the dead marine mammal discovered between Magwaish Island and Gotaa Magawish, the latter sent a patrol boat out to investigate. When HEPCA arrived, rangers working for the Egyptian Ministry of State for Environmental Affairs were towing the 500kg female dugong to the shore. 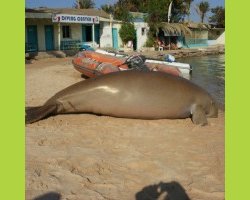 Dead dugong on the beach
© HEPCA

Further analysis will be performed in order to determine the cause of her death. A biopsy of the lungs and kidneys shall give more clues about why she died, and it will be the first time that a DNA print can be extracted from a dugong swimming in Egyptian Red Sea waters. 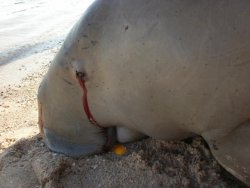 The dugong showed no signs of external trauma and had just died when they arrived, HEPCA says. While it is too soon to know for sure, activists suspect that the increased development and tourism traffic in Hurghada might be partially responsible. Once the autopsy completed, HEPCA hopes to be able to report their findings to the public. In the meantime, they are mourning this tragic loss. “It’s a sad day when we lose such a beautiful animal,” they posted on Facebook. ”The harassment that these animals are exposed to by endless excessive pressure of snorkeling and diving boats has got to stop,” they added. “Although the examinations are not finished yet to determine the reason of this dugong’s death, the pressure on seagrass beds where these beautiful animals feed on such as Abu Dabbab, Marsa Umbarak and Magawish and the continuous harassment has gone beyond tolerance. This crime has to stop.”

On January 30, 2013, at 208 votes against 131, the French Senate passed a law proposal submitted by Alain Bertrand, Senator of Lozère, to facilitate wolf-killing. The single article of the law states that “the killing of wolves is allowed in areas of enhanced protection, defined each year by prefectural, regardless of the sample defined at national level. A specific limit of destruction is provided for each area.” For the season 2012/2013, the shooting was limited to 11 wolves in France; this law will therefore allow “additional shootings”.… While the wolf has returned to France since 1992, its current population is estimated, 20 years later, about 200 to 250 wolves, mostly in the Mercantour, Queyras and the highlands of the Vercors, according to the National Office of hunting and wildlife (ONCFS). Twelve deaths were officially recorded last year by the ONCFS (National Office of Hunting and Wildlife): shooting, poaching, natural or accidental death.

“In 2012, nearly 4,920 “probable” wolf victims were identified. We shall report this number to the annual sheep mortality (diseases, etc.), which comes to about 700,000 animals”, according to Jean-François Darmstaedter, president of the association FERUS. A new “national action wolf plan of action”, currently set for the period 2013-2017, sets out the principles, objectives and the means implemented by the Government under national commitments towards biodiversity conservation. But what does it contain?

“There” will apparently no fundamental change from the previous plan. The only novelty may be an increase of the annual quota of sample shots, which I call "political “shots”, says Jean-François Darmstaedter, who is part of the national group with FNE and WWF. For the FERUS association, other measures are much more urgent, as the reform of the premium allocations, which are attributed to farmers whose sheep have been attacked, and not to farmers who take the necessary protective measures.

How will the wolf meet these challenges? It seems its survival depends on an even greater discretion. It did not save the lynx in France since the last counting lynx in the Jura & Vosges estimated its population at ... 10 individuals, and the lynx is by nature less visible than the wolf. 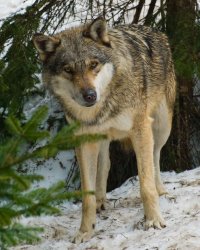 Not only does the French State do everything to limit the wolf’s geographic expansion in our country, it blames the wolf for problems it couldn’t take care of. In its press release, the Minister of Ecology specifies that the 2013-2017 plan will be subject to public consultation (really, what public?) in the coming weeks (when?) for a period of one month. It will also be presented to the Committee of the National Wildlife Conservation, 8 April. It should be officially launched in April, before the rise of cattle into summer pastures.

In fact, what is the budget for all these meetings and working groups? Who benefit from the attacks of wolves, between grants and expertise? Could we not assign these funds directly to the acquisition of protective dogs? To reduce the vulnerability of livestock, ONCFS believes the implementation of preventive measures (dogs, parks consolidation and guarding) reduces the risk of attack by 70% compared to an unprotected flock. Of course, the answer is not that simple: indeed, it has been long time since we have lost of our relationship to nature and “simple” common sense...