by François Moutou, editions « Le Pommier » : to buy for the pleasure of traveling and meeting wild animals.

The exhibition “Animals of Sex”, visible in Paris from 13 October 2012 to 25 August 2013, wants to explore the world of seduction in the animal world and also has us wondering about the moral codes governing our own sex lives. 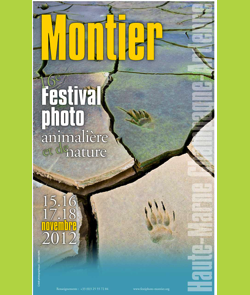 This year, Jim Brandenburg is the godfather of the exhibition, Hubert Reeves the special guest, and M. and C. Denis-Huot, the guests of honour.

As part of its outreach program to the conservation of marine ecosystems, GoodPlanet invites you to its “OCEAN DAYS”, free access, from Dec. 15 to 19th Dec., 2012 at the Quai Branly museum and the Geode in Paris. To register: http://ocean.goodplanet.org/agenda/

The Saddle-billed Stork (Ephippiorhynchus senegalensis) is a large wading bird in the stork family. Along with the Marabou stork, it is the largest species of stork. The bird is elegant: a slender silhouette, a bi-coloured plumage: black and white, sometimes iridescent at the neck. The legs are black, but the “knee” and feet are red-orange. The long bill measures from 27.3 to 36 cm (10.7 to 14 in). The massive bill is red with a black band and a yellow frontal shield (the “saddle”). 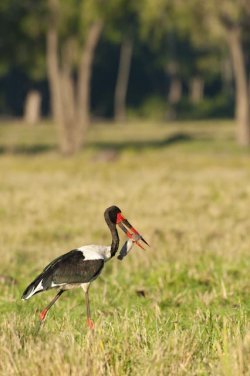 The base of the bill is covered by a large flat saddle-shaped caruncle, hence the name Saddle-billed Stork in English. The male has two small wattles at the base of the lower mandible. The golden yellow irises of the female and the brown irises and dangling yellow wattles of the male makes it possible to distinguish the sexes readily. These are the only signs of sexual dimorphism in these birds, although the male tends to be slightly larger. The adult weights between 5 and 7 kg (11 and 15 lb) and can attain a height of 150 cm (59 in), a length of 142 cm (56 in) and a 2.4–2.7 m (7.9–8.9 ft) wingspan. 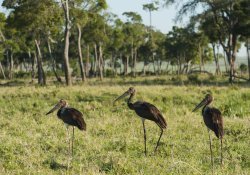 and the watching youngsters…
© Tendua

Juveniles are browner grey in plumage, but their feathers - white adult - are greyish. Their beak is dull grey-brown.