Against the patenting of seeds

Catalogue of seeds and French Law In the 30s, the idea of a first catalogue was raised in order to reference the names of seeds. Since then, there were many others catalogues and finally a European one. In 1997, in France, vegetable varieties are joining the new catalogue and “Sunday gardeners” are then directly concerned, as well as all small farmers who do not use the F1 hybrid seeds. What does say this official catalogue, backed-up by French law, say? "Any seed, which is not included in the sale is prohibited, as well as exchange between farmers”, even though this is ancient and international practise. For the French Ministry of Agriculture interprets these practices as hidden sales. Therefore, the exchange is forbidden by government decree.

The GNIS The National Seed Group of Inter-professionals (GNIS), whose members are drawn from representatives of the French government and of major players in the agrochemical industry, deals, among others, with catalogues. It seems that the reputation of the GNIS is not based on farmers who know it well because it: Claims payment of a Voluntary Required Contribution by farmers who reuse their farm-saved seed, that will be donated directly to the seed industry, up to 85% of its amount, Prosecutes farmers who breed farm seeds of protected varieties by a French law that prohibits it, but which is hardly used since the adoption of a European regulation in 1994 which authorizes this breeding, Sends its controllers to pursue farmers who conserve, use, exchange, or sell their own farm seeds. Seed manufacturers do not tolerate that farmers benefit, just like them and legally, the “breeder’s privilege”, which allows them to use the varieties available in the market, select their own varieties, and exchange their seeds for selection and retaining.

F1 hybrid seeds vs old In order to understand the subject better we must return to the definition of a seed in agriculture, and find out a thing or two about their origin and marketing. To make it short and simple: there are “natural” seeds, used by humans and kept by them, reusable each year. And then there are hybrid seeds, F1 (first generation hybrid) most often. Invented by the Americans in the early XXth century, they are the most common. The process is roughly as follows: the seed industry takes two maize varieties for example, as distant or different as possible, and crosses them over a period of several years (6 or 7 years). Finally, the seed company gets a hybrid variety with new genetic characteristics: better performance, same size feet, disease resistance, but also a variety, which is sterile. It needs to be bought every year, so this naturally provides an annuity for the seed company and a chronicle of announced ruin for small farms.

The agro-chemical lobby World leader in GMO, Monsanto is the origin of many controversial products since its inception in 1901. The list is long. The company is the largest producer of PCBs (the pyralene, now banned persistent organic pollutant and responsible for a great deal of pollution), Agent Orange, a herbicide used during the Vietnam War and highly carcinogenic, and growth hormones for bovine and dairy cattle, banned in Europe. http://www.rue89.com/2008/02/16/ogm... Monsanto is sadly notorious and represents the agrochemical giants well. This has made our industrial agriculture today more like “the management of agricultural pathology” with more and more F1 hybrids, pesticides, herbicides and other chemical means. Then, sick plants generate new human diseases to which the pharmaceutical lobby will probably find a chemical remedy that will produce side effects in its turn, but will also generate income...

Farewell, golden wheat and green fields from our collective imagination!

Monsanto is not alone, there is also Bayer, Syngenta ... Their interest is to make us believe that without fertilizers or pesticides, agriculture cannot feed the whole world in the end. We “must” therefore use their products to produce more, at the expense of quality and our health, but also to the detriment of the Earth that has nevertheless developed all conditions (trees, humus and clay) to grow hundreds and thousands of plants that we know today and are well adapted to the various climates ... Of course, this is a huge part of our economy that would go wrong, if we should return to more natural methods which would make it possible, we are sure of it now, to feed the world’s population. This is a societal choice. Should we feed the whole world according to the laws of nature, or should we continue on a trend that destroys the Earth? and thereby fail to feed everyone, and only provide good economic returns to a small portion of its population?

Associations throughout the world are fighting for a responsible and organic agriculture, as well as the fundamental right to exchange seeds. In India, for example, Navdanyais working to promote agro-ecology. Kokopelli is a French association that maintains, distributes and sells organic seeds and old varieties in order to preserve biodiversity and vegetable seeds. In Ales (Gard, South of France) it is a store for more than 3,000 farmers’ varieties. 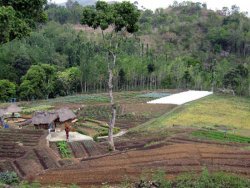 The association has producers throughout the world and publishes its own catalogue every year, filled with pictures, varieties, advice, etc. It builds projects and gives (i.e. free of charge) many seeds to smallholder farmers in Africa, Asia, and South America to allow them access to food self-sufficiency.

Sued in 2005 by the company Baumaux (“grainetier in Nancy since 1943”) for unfair competition, and after several legal twists, it turns out that Kokopelli is sentenced to a €100,000 fine in damages to pay to Baumaux (whose turnover amounted to €14M in 2011 and net income €2M...). Baumaux also asks for a complete cessation of the association’s activity. If you want to take action and release the seeds in Europe: http://www.avaaz.org/fr/petition/Qu... To find out more about different ways to proceed and know more about agro-ecology, here are the names of some exciting documentaries and other links: