Europe: Shark Alliance is fighting for a better regulation against finning

In September 2012, the Fisheries Committee of the European Parliament voted on the proposal from the Commission that sharks should be brought to land with their fins naturally attached. The vote was close and confusing, with an amendment that would have effectively widened the gap, but other changes have been made which always refer to exceptions “fins naturally attached.”

The Fisheries Committee’s report should now be presented in the plenary session of the Parliament. The question will be debated on November 21 with a vote on November 22. http://www.protection-requins.org

The illegal trade of endangered species today drains large sums. It is the fifth traffic after counterfeiting, drugs, weapons or oil. As a species number decreases, its derivatives are coveted more and more, thus accentuating the probable extinction of the species. At equal weight, a rhino horn is twice the price of gold. On the Asian market, a rhino horn is synonymous with wealth and power. In Vietnam, the main market for the derivative, data is almost non-existent. However, the South African figures show very clearly the growing demand. This is proof, if any were needed, that the application of international conventions is far from optimal. 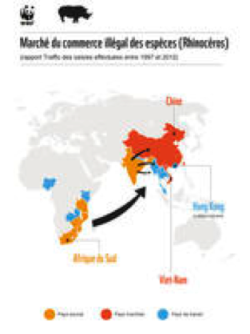 How can citizens take action? Lobby to make the species protection a priority for governments. This does not mean simply to strengthen international cooperation. It also means enforcing the laws.. Endangered species trade is a crime. To allow this crime against nature is not an option. Animal life is also part of the wealth of nations. Today we must act quickly because every endangered species is a battlefield. In northern India, Assam, where 2400 horned rhinoceros still were to be found in 2008, only 2050 remain in 2012. More than 300 animals were killed last year...

CITES March 2013: urgent need to reregister the elephants in the Appendix 1 in order to fight against international trafficking of ivory

populations in Africa have experienced a brief respite of about seven years, between 1990 and 1997. The resounding international campaign in the 1980s led by various organizations culminated in the ban on ivory trade by the Convention on International Trade in Endangered Species of Wild Fauna and Flora (CITES) in October 1989: from the Appendix 2 of the Convention (trade authorized under control), all populations of African elephants were transferred to Appendix 1 (totally prohibited trade) where the Asian elephant was already since 1975. 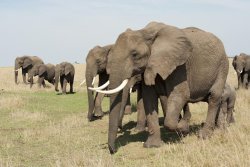 This decision had an immediate effect: a spectacular and even unexpected fall of poaching. Experts recognized that there was a subsequent rise in elephant populations who needed a break of at least twenty years to regain their population level of the 1970s anyway.

Unfortunately, supporters of the ivory trade, in particular South Africa, lobbied so hard that there has been a return to Appendix 2 in 1997-2000 of CITES for the elephant populations from four southern African countries: Botswana, Namibia, Zimbabwe and, of course, South Africa. The trade -supposedly controlled, but actually uncontrollable- therefore resumed as before. These countries served as channels for the ivory poached in the other 25 countries in Africa, who chose to remain in Annex 1 to save their last elephants and forego short-term profits. This trafficking however - exclusively and paradoxically granted by the CITES to China and Japan, the two largest consumers of ivory - cost the lives of nearly 40,000 elephants a year, according to estimates based on seizures by customs in different countries. This represents only 10% of illegal ivory exports. 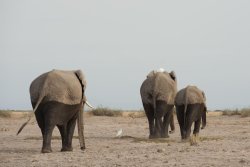 Accordingly, and in order to prevent the inexorable extinction of all elephant populations in the next decade, it is vital that, at the next CITES conference to be held in March 2013, the signatory states vote for the effective return to Annex 1 of the CITES of all populations of African elephants who had been downgraded to Appendix 2 in 1997. Numerous petitions or requests for financial aid are flowing to the elephants, but not one with a request for REGISTRATION in APPENDIX 1 TO THE CITES. This is the only measure that would stop the ivory trade. When it is ready, we will send it to you. Source : SNPN