Saturday March 31 at 8:30 pm : let us all turn off the light to see the world differently !

The Earth Hour movement, one hour for the planet and against climate warming, asks everyone with electricity all over the world, to turn out their lights. Last year, 1.8 billion people turned out their lights for Earth Hour. Ready to beat the record? http://earthhour.fr/

People have asked us about the fight against cosmetic anti-aging creams using squalene from sharks (cf. our article on http://www.protection-requins.org/a... Apart from these creams, on internet and in so-called “organic” stores, they sell “dietary supplements” using shark cartilage. This has more to do with placebo effect than scientific reality. Studies have shown that the ingested quantities are totally insufficient to take care of any type of rheumatism. Please tell people around you that the sharks are disappearing from the oceans, and an ecosystem that disappears will not be reconstituted. It will be replaced by an ecosystem where the old weaker links become dominant. More sharks means more fish, so more jellyfish and sea worms will appear… 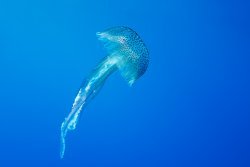