Russia : death of an Amur Leopard

At the end of December 2011, rangers in the reserve of the region of Primorye, found the body of an Amur panther. At the beginning of the Fall in 2011, scientists from the Academy of Sciences in Russia equipped an adult male with a satellite collar, whom they baptized “Uzor” (“Pattern”). The animal weighed 62 kg and was in excellent health, about 5 or 6 years old. 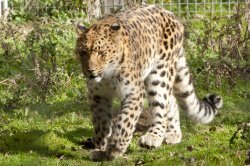 The photo-traps made several times during the Fall and the beginning of the winter showed shots of Uzor in good shape. This animal was found killed by poachers 4 or 5 weeks earlier. On December 31, 2011, the rangers and scientists who were called there found the remains of a sika deer, approximately 130-150 meters from there, killed and torn to pieces by poachers in the same time period. It was established the male leopard was killed around the 10th or 15th of November 2011, just before the snow settled in.

The poacher shot from above toward the bottom at a distance of 130-150 m. Given the vegetation in that area, he could have mistaken it for a deer, or not have seen its satelitte collar and shooted at it, then he decided to abandon Uzor’s body.

Coral reefs occupy less than 1% of the earth’s surface. However, they are home to one fourth of marine fish species known today, and thousands of species belonging to other zoological groups such as marine invertebrates, mammals, etc. Indeed, the reef ecosystem, the structure of which is built by corals, is the richest in biodiversity of all ecosystems, along with tropical forests, as well as the most complex and the most productive of the planet. Corals live primarily in shallow zones, quite close to the sea surface, in salty waters of tropical seas where the temperature is situated between 20 and 32°C and where the transparence of the water allows light to penetrate. Living in symbiosis Coral reefs are made up of billions of little animals, polyps, that live in symbiosis with microscopic algae called zooxanthellae. The two species are interdependent, offering each other shelter and nourishment. The zooxanthellae are plants which perform photosynthesis through sunlight, in drawing out the CO2 dissolved in the water and producing oxygen and the indispensable nourishment for the polyps. The polyps in turn protect the zooxanthellae, breathe in oxygen, emit CO2, and provide their hosts with nourishment coming from their own excrements. Each polyp lives inside a shell of calcium carbonate. The polyps join together to form a complex structure characteristic of corals, while the zooxanthellae determine their color. 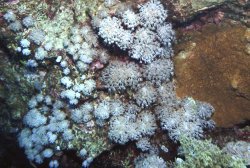 The threats In many parts of the planet, the environmental changes we know today have destructive effects on this ecosystem. A modification of water temperature (the sea is warming faster than scientists have foreseen), its salt level, changes in the current, a strong storm or yet certain exceptional conditions such as a tsunami “disturb” the coral and create stress. A pH variation in the water, an acidification due to dissolved carbonic gas, a chemical modification of the water, nitrates and phosphates (agriculture) also generate stress.

In these cases, the coral weakens, receives less oxygen, and ends up expelling the zooxanthellae, without which they cannot survive. And this is when the discoloration or bleaching comes in. The zooxanthellae are able to reintegrate the coral but when the stress is too great, the zooxanthellae do not come back and the coral dies, invaded by algae (invasive algae of other species that live on the surface). 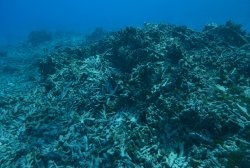 The Acanthaster, an invasive starfish which covers the coral with its stomach before ingesting it, is another threat for the corals. This is a real problem, such as in Tahiti.

The first coral bleaching was observed in 1979. Since then, there has been regular talk of this. It is no longer a matter of isolated cases but entire zones of corals that whiten and then die. This phenomenon has been observed a little bit everywhere and notably in the Great Coral Reef. 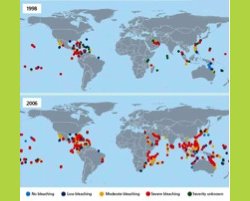 Apart from these natural phenomena, human activity is responsible for coral bleaching: of course, agriculture, as we have already mentioned, but also the construction of tourist complexes and the throwing away of the materials in the sea, the used waters having variable concentrations of toxic products. The “all–in-the-sewer” is often transformed into “all-in-the-sea”…

What would be the impact of coral extinction? Corals reduce the quantity of carbonic gas in the planet’s atmosphere.

The coral skeleton is made of crystals of aragonite, that is, calcium carbonate. Calcium exists in great quantity in water and “carbonate” is nothing more than dissolved carbonic gas. This is proportional to carbonic gas in the air. Corals transform this CO2 into a firm skeleton, thereby taking part in their own way in the purification of the atmosphere. An acidification of seawater will not only kills corals but the slow dissolving of their calcium skeletons allows the restitution of CO2, which will proportionally pass into the earth’s atmosphere …

Egypt : the dugongs in the Red Sea

A piece of good news! After a few fortunate divers spotted a coupling on the South coast of the Egyptian Red Sea, the birth of a baby dugong was reported, seen last November. To refresh our memory, gestation lasts between 12 and 13 months and the little one, by itself, remains next to its mother for 18 months to 2 years. Let’s hope the little one will grow up calmly within its group.

Norway: treasure chest on an archipelago

Source le Monde 03/7/12 On the island of Spitzberg in the archipelago of Svalbard, between the North of the country and the North pole, a world treasure vault, a warehouse built in the permafrost where hundreds of thousands of specimens from the whole world are kept since 2008. What is this bounty? Seeds of amaranth from the ancient Incas, rare wheat from Pamis, peas and other barley grains and seeds from Costa Rica. Tadjikistan, Armenia, Syria, United States…. 1400 world banks and gene collections can assure the preservation of their own store if they bring it there, at one of the 4 annual openings of the Norwegian treasure chest. And this is not necessarily a luxury: in February, the Philippine seed bank burned; at the end of 2011, the Tai seed banks drowned, and we know the threats surrounding the Vavilov institute; in Irak and Afghanistan, the seed banks were pillaged. There are 741,471 seeds lying dormant in Svalbard at -18°C.