The Fukujima catastrophe in March 2011 shook up the planet. After this nuclear fiasco, the Japanese had to reexamine their energy consumption. And out of necessity, companies and Japanese households reduced their energy level to almost 40% between March and December 2011. As a consequence, renewable energies play a major role. In France, they are somewhat in the shadow of oil and nuclear power. But what does “renewable”and “clean” mean? Or inexhaustible? Does this really mean something or is it just a question of marketing and communication (once again) ? There are energy sources that seem inexhaustible, on a human scale, but should be in a very, very, very long time. Right or wrong, we do not feel very much concerned… Provided by the sun (photovoltaic solar energy, and thermal solar), the wind, geothermal energy coming from the earth’s core, waterfalls, tides and streams (hydroelectricity), these energies are qualified as renewable. Their exploitation generates little waste or polluting emissions. They do not let off CO2 into the atmosphere. They participate in the struggle against greenhouse effects and their exploitation locally fosters jobs. They are inexhaustible flow energies as opposed to “stock energies” taken from fossil fuel wells, which are becoming rarer: oil, coal, brown coal, natural gas 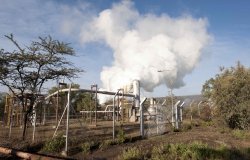 Biomass and agrofuels Two main agrofuel industries co-exist right now : oil and its derivatives, such as biodiesel, (or biogazole), which comes from oleaginous seeds, such as colza and sunflower, and the alcohol line (ethanol), which comes from sugars, starch, cellulose and hydrolyzed lignin. They can be used pure like in Brazil (ethanol) or in Germany (biodiesel), or as additives to classical fuels, like in France where ethanol is produced 70% from beets and 30% from cereals (which ones?) The energy taken from biomass is considered renewable and sustainable as long as the resource is not over exploited, which would threaten soil fertility, and as long as there is not excessive competition in usage (arable lands and water), nor excessive impact on biodiversity. Very nice on paper, but who evaluates this criteria and how?

As for agrofuel, called improperly « biofuels », it is difficult to assure that this energy is « clean ». Certain countries of Latin America or Asia headed this direction a few years ago toward agrofuels and cut down their forests to plant palm trees (oil, them again) used for fuels and speculated on the considerable profits they could make in little time…

But the most important thing of all is to be careful of our daily energy consumption: to think about it and cut down on it when we can, with simple gestures: turn off the lights when we leave the room, pull out the plugs for machines when we don’t use them, optimize our trips…

Eating, both a pleasure and a commitment… for the rich countries

Source WWF – 2012 and le Monde 03/8/12 Although we shouldn’t live to eat, it is still true today that man needs to eat to stay alive. While one billion people go to sleep hungry (75% are peasants) and close to another billion suffer from sicknesses related to excess weight, 30% of food produced in the world is either wasted or lost. This is one of the points underlined by the report for the right to eat, presented on the 6th of March at United Nations. Contrary to what is commonly heard, it should be possible to feed all the inhabitants of the planet without producing more than we do. And, as the United Nations report recommends, “we should reconsider the dominant model of productivist agriculture, and policies supporting the food industry and farm subsidies”. This would benefit local diversified agriculture, which is only in the hands of those “who believe in it” without much more encouragement than the fruit of their labor and convictions.

Apart from the social inequalities generated from this, our system of production and food consumption has negative impacts on the environment and health, and more generally, on our quality of life. Would we be capable of reconsideration, if we take into account profits generated by the “superpowerful” food industry lobby? What is at stake is not to produce more but produce better and consume better. To feed the planet of humans without damaging our environment and health more than we have already. Alternatives do exist. There is a way to allow our needs to be met in due respect to nature and men. WWF France initiated a campaign with its partners, CFSI, Max Havelaar France, RES and Slow Food to create an internet website: : : http://goutons-un-monde-meilleur.fr/,an exchange platform and a practical guide to learn how to consume better. Interested in becoming ACTIVE?? http://goutons-un-monde-meilleur....