In October 2011, TENDUA joined SHARK ALLIANCE, international coalition of more than 100 organizations concerned by the oceans, active in the areas of protection, science and leisure. It allowed for the go-ahead of the fifth European Week for sharks by appealing to the ministries of Fishing in the European Union to protect sharks from overexploitation and finning. Sign the petition until January 8, 2012 on : http://www.sharkalliance.org/conten...

On November 21, 2011, the Asian hotel PENINSULA decided to no longer serve shark fin soup in 9 of its establishments in Peking, Hong-Kong, Shanghai, Bangkok, Manila, Tokyo, New York, Chicago, and Beverly Hills. This will begin in January 2012.

Here are a couple of pictures of a young caracal polishing up a francolin meal. 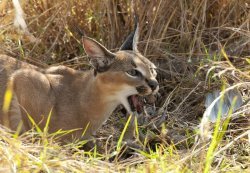 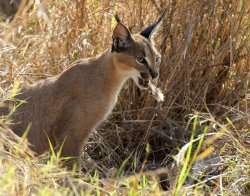 there is a feather remaining...
© M. Dupuis

Thank you for your attention and see you soon.