MOZAMBIQUE: the systematic destruction of forests

The prosperous exploitation of Mozambican exotic wood is out of control thanks to a background of corruption.

Almost 70% of Mozambique (54.8 million hectares) are (or were ...) covered with forest areas. About 80% of the population, or 16 million people live in rural areas, where poverty concerns more than 50% of the population. This rural population depends on the forest. Despite the discovery of large deposits of gas and coal, the Mozambican population is still predominantly cooking with wood and charcoal. During the civil war (1981-1992), Mozambicans have destroyed thousands of hectares of forest. Today, they are forced, for lack of other economically accessible solutions to cut down trees to build homes and cooking. Thus nearly 20 million m3 of wood are burned each year (85% of energy consumed) .... 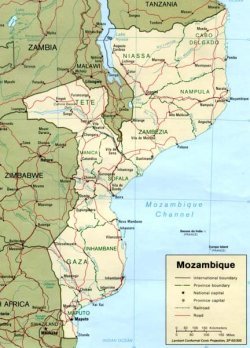 According to the Inventário Forestal Nacional [National Forest Inventory], 0.58% of forest resources in Mozambique, or 219,000 hectares disappear each year (2008) ... and it lasts for several years now ...

Unfortunately, that’s not all ...

If rural poverty is one cause of this deforestation, the trucks that you come across on the country’s roads, laden with gigantic trunks, are dramatically more responsible for deforestation. These trunks are used to make furniture in China, where the expanding market requires huge amounts of wood but also in Indonesia and India, often for final consumption in Western countries.

The Mozambican wood is excellent and cheap. It arouses fierce appetites that lead to a slow but steady destruction of vast forest areas in the central provinces and northern countries, particularly those of Sofala, Zambezia and Cabo Delgado.

Local newspapers and associations regularly denounce the plundering of forests, but traffic continues.

An illegal trafficking, a corrupted system 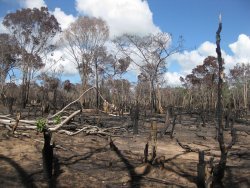 Traffickers make contact with local authorities. Once they get the green light to exploit the forest, they recruit pisteiros [trackers] to find valuable species. They then hire locals called “Pingo Pingo”, who cut down trees and load them into trucks.

To export the wood, it must then obtain permission from three institutions: the Customs, the provincial Service of forestry and wildlife and the directions of industry and trade of concerned provinces. Buyers do not get dirty hands : they remain in the shadows and wait in the port cities. The illegal timber trade is a known issue with all authorities that bemoan their own inability to oppose a more structured system that their services. Even the local communities protect illegal loggers. “Often, it is precisely the inhabitants of these areas that cut trees and when we ask them why, they say they need money to survive”, said an Mocuba administration official, quoted by Savana. Mozambican authorities seize each year large quantities of valuable timber. If the number of seizures and fines increase, the volume of illegal exports remains immense. And despite the introduction of new rules, the raw wood continues to be exported, mostly to Asian countries. In July 2011, a Chinese company has been penalized for having cut 10% more trees than the allowed amount. The essence of the wood cut must appear in indelible ink on the trunks. This information is used to determine the export taxes that apply. According to local daily “O Pais”, logs seized in 2011 were inscribed with chalk indicating a wood second category, whereas it was actually pink ivory (Berchemia zeyheri), a protected variety. 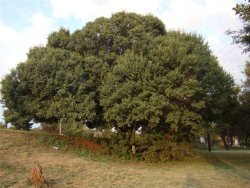 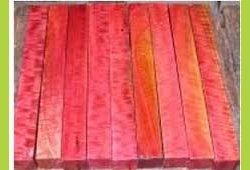 This prosperous traffic amid corruption. With the support of their political influence, the wood’s exporters bribe the employees of port companies in order for logs to be not reported. Many leaders, suspected of involvement in trafficking, were arrested, but when we try to learn more, authorities are often reluctant to provide details, probably for fear of reprisals from the organized crime.

These are gangs that determine the price of timber. Faced with this problem, small loggers begin to form associations. At a meeting held in June 2012 in Beira, they expressed their displeasure at that time vis-à-vis the government : they feel “abandoned”. To date, there is no scale of timber prices. Commercial use causes degradation of forests and opens the door to other harmful activities to the environment, such as charcoal production, warns the Centre for International Forestry Research (CIFOR) in a report released in 2012.

Reforestation projects ... good but not enough

Along the road from Mozambique to South Africa trees are scarce. It is a barren wasteland that unfolds before your eyes, with only a hut here and there. Several international NGOs are financing reforestation projects in areas now devoid of vegetation, as Massaca on the outskirts of Maputo. This village is in a catastrophic situation from an environmental point of view: its forest heritage has been completely destroyed. Antonio Cossa, from the Department of Economic Activities of the County of Boane, remembers the days when Massaca was a green area. “In the 1980s, the village did not exist yet. It was a dense forest. There were just a few colliers that cut wood to turn it into charcoal and sell it in Maputo. Today, there is not even a single tree.”    The coal that is used by Mozambicans is coming from harvested wood from natural forests without control and without reforestation ever envisioned. Current policies are going in the right direction, but, in practice, nothing is really done to enforce the law. Yet in July 2011, President Armando Guebuza received the Earth World Wildlife Fund (WWF) for its efforts to protect natural resources development including awareness campaigns children for reforestation. Perhaps this is still not enough to change attitudes according to which, in the words of the Mozambican writer Mia Couto, trees are “enemies to be destroyed” ?