Why do we have “nitrates” in our food?

When you hear the word “nitrates”, you inevitably think about some fertilizers and manure that pollute rivers and coasts, while their almost systematic presence in our food is dangerous for our health.

The essential element of the “black powder”

The “black powder” (also called gunpowder), discovered in China, long before the French chemist Lavoisier determines, in the XVIIIth century, that nitrogen and oxygen are the constituents of air and that they both combine in the “nitre”, or the saltpetre (one nitrogen and three atoms of oxygen: NO3) , was introduced to Europe by the Arabs around 1230. 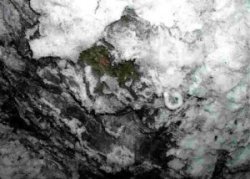 With the charcoal and sulfur, the saltpetre is one of the three main elements of the first explosive used by man. We know that this “mineral niter” or saltpeter, collected on the walls of wet areas, is potassium nitrate. The caves and cellars where was collected the saltpetre became highly protected areas because the saltpetre was required for the manufacture of gunpowder. Who’s got the saltpetre gets the gunpowder, and then has the supremacy by the effectiveness of its weapons ... Woe to the chap who wanted to enter these damp cellars : it was punished as a crime! In the XIVth and XVth centuries in the Western world, the composition of gunpowder was : 6 parts saltpeter for 1 part of sulfur and 1 part of charcoal. Subsequently, men devised varying compositions according to the purpose for which the powder was intended as mining, hunting, war and fireworks. 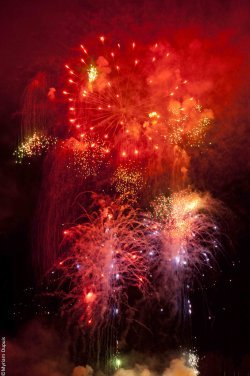 Fireworks for the 14th of July, the French National Day
© M. Dupuis

In the XVIIth century in France, the “Royal Arsenal - powder and saltpetre Commission” was in charge of the powder production and had sole rights on behalf of the king. Considering the increasing needs of powder due to many wars waged by Louis XIV, it was necessary to renovate old production sites or build new. Thus, the explosives industry was well historically the first user of nitrates, which are still the basis of the most violent explosive like nitroglycerin synthesized in 1846 by Italian Ascanio Sobrero and stabilized by Alfred Nobel in the form of dynamite or melinite and TNT (trinitrotoluene).

from chemistry to agriculture

In 1840, the German Justus von Liebig demonstrated in his “Applied organic chemistry to physiology and agriculture” that only mineral elements in the soil are involved in plant nutrition. Among them, nitrates are essential. Therefore, it is necessary to give back to land the quantities that the vegetation has taken. This assumption became the rationale for the fledgling chemical industry. People did not care about how the land gets by without human intervention. Once again, we’re not going until the end of the reasoning and we ignore the consequences of our intervention ... Then, the chemist becomes an indispensable contributor to the farmer, first for the analysis of soils, then for determining the formula of the fertilizer required for the planned production.

The common sense of farmers

However, all that “stuff” is expensive. Why should we invest heavily in the production of nitrogen while nature provides it for free? The nature provided the soil with bacteria that convert organic material into nitrates ; leguminous plants well know how to fix nitrogen from the air. The agriculture does not need external aid. The farmer knew that he had to alternate the different productions, to make the necessary amendments to balance animal and plant productions and to treat manure quality, to select the best breeds suited, to develop the relevant plows, and, finally, to obtain from the natural environment the best of what it can provide, at the lowest cost. Let’s return today to this ancient tradition of “letting nature take its course” after the terrible situation of leached and sick soils of all industrialized countries ... and other countries to which we export our poisons for “economic” reasons ....

From explosive to fertilizers

At the time, as the nitrates remained an industrial luxury product, this discourse of common sense has been heard. The great works of the late XIXth century, and especially armed conflicts, come make a difference. It takes more and more nitrates for explosives. But where to find the raw material? Combine the nitrogen and the oxygen in the air is an obvious solution, but even if the basic products are free, processes are very expensive. 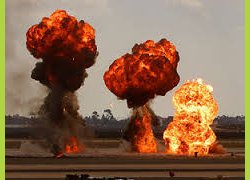 The World War of 1914-18 accelerates the development of this industry and allows the birth of famous chemical groups that still make billions nowadays.

After the war, what to do with all these stocks of synthetic nitrogen products? Agriculture is becoming a natural outlet. This is the time when posters invite farmers to agricultural patriotism: “You serve your country when you fertilize your land .” Nevertheless, the farmer does not let himself be so easily convinced. The liftoff of the nitrates industry is done after the II World War. The “liberty ships” of the Marshall Plan have poured the huge surplus of nitrates released by the American war industry on Europe. There is a need to rebuild the cities and to feed people while taking in the farming community , at the same time, the labor force required for the works. 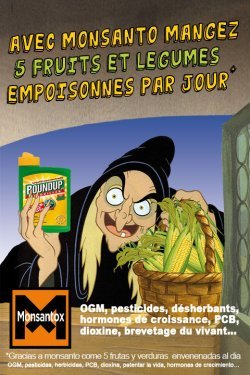 In 1975, the Roundup total herbicide is put on the market and knows a great success.
© Source : internet.cf.

It is especially time to furbish arms of a new war, a “cold” war that is first led in the field of economics. The search for yield is launched. This is the beginning of “the Thirty Glorious” and the productivist reign. Cf. http://www.combat-monsanto.org/spip...

A reign that is ending today, leaving us, in the name of progress, facing an environmental mess that we do not know if we can recover, productivist appetites being neither sated nor taking into account past mistakes ...