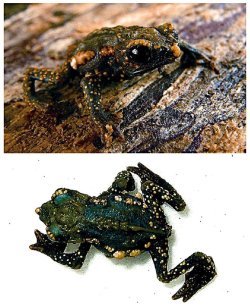 Discovery of the Smallest Frog

In « La Bonita », an area located between Colombia and Ecuador, Colombian and Ecuadorian researchers have discovered the smallest frog in the world, the Mexican television announced on Tuesday.

Females measure 18mm, whereas males only 12mm. The frog is brown, but its skin is so translucid that you can even see its skeleton.

The frog was baptized Osornophryne cofonrum and will appear from now on in the Book of Protected Species from both countries (Columbia and Ecuador).

Winter has come: let us think of the birds 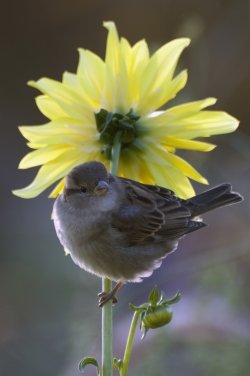 Many species are in decline, like our unhappy sparrow and the more and more rare robin… as well as all the others.

You can help them get through the winter by setting up a drinking place and a bird’s house with seeds you can buy in a garden store, grease balls (for finches and sparrows) even vegetable and fruit skins, which are too ripe for blackbirds and thrushes.

Don’t forget to change the water everyday (a big dish for their bath would be highly appreciated as well). Thank you Bérangère for all this information and the link for the LPO for any complementary information: http://paca.lpo.fr/index.php?option...

According to the last update of the IUCN red list :

There are 17,291 endangered species out of the 47,677 recorded species. In the last 40 years, the number of mammals, birds, reptiles, amphibians and fish has declined by 30%. 13% of birds; 22% of reptiles; 25% of mammals, 33% of sharks and rays (cartilaginous fish), 35% of invertebrates, 41% of amphibians and 70% of plants are endangered of are in confirmed decline. And this is only according to what has been discovered and listed: what do we have to say about the extinction of what hasn’t yet been recorded? We also know that 60% of ecosystems on the world scale are degraded and the species extinction rate has multiplied by 200 during the course of the last two centuries.

In conclusion, here is the message of the Secretary General announcing 2010 as the year of Biodiversity. The speech is meaningful, but what is our actual situation today at the closing of 2010?

"You are the biodiversity. The major part of the oxygen that you inhale comes from some plankton of the oceans and the luxuriant forests of our planet. Fruits and vegetables that you eat, were probably pollenized by bees, and the water which you drink is a part of a wide cycle where you have your place, with clouds, rain, glaciers, rivers and oceans.

Your diet depends almost completely on plants and on animals that surround us, from grasses, which give us some rice and some wheat, up to fishes and in the meat, which result as well from breeding as from the wild life. Your body contains 100 trillions of cells and it is connected to all, which so surrounds you that to the outside world, within a system magnificently complex and timeless. You share your atoms with every being and every object of the natural world; you are at once an ancient and incredibly young person. Biodiversity is life and biodiversity is you.

You share the planet with about 13 million different alive species, including plants, animals and bacteria, among which only 1,75 millions were identified and registered. This incredible wealth is an incalculable treasure, which constitutes the real foundation of your human well-being. The systems and the processes generated collectively by these million neighbors produce your food, your water and the air that you inhale … the fundamental principles of the life.

As if it was not sufficient, they also supply the wood and the natural materials for furniture, constructions and fuels, mechanisms to regulate the climate, control the floods and recycle your waste, as well as the new components and the chemicals allowing to produce medicines. The biodiversity can seem to you so evident, and it is so evident everything around you, that it is sometimes easy to forget it. You are a member of it and you cannot live without her.

The contribution of the biodiversity to your life is not only practical, physical and utilitarian, it is also cultural. The variety of the natural world was a constant source of inspiration throughout the history of the humanity, it influenced the traditions, and the way our society evolved and supplied the goods and the basic services, which allowed the business and the economy to build themselves. The disappearance of a unique species represents an incalculable loss and impoverishes us all.

The loss of a symbolic species is not only a cultural tragedy; it also threatens our own survival. Wonderful and plentiful variety of the natural world is put in danger by the human activities. The cutting down or the fire of forests, the disappearance of mangrove swamps, the practice of the intensive farming, the attacks of the pollution, the overfishing and the effects of the climate change, all this destroys the biodiversity.

We can stop it, the question is to know if we are going to do it. The international Year of the biological variety represents our chance to prove it."