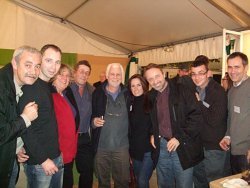 The festival of animal photography took place, as is has every year for the past 13 years, on the 3rd weekend of November (from 19th to 22nd November). The leading exponent of the festival in 2009 was Frans Lanting, world renowned figure of animal and nature photography. TENDUA also attended and established new contacts.

Animal photographers are witnesses to the disappearance of species and the degradation of our planet. Beyond the beauty of the subjects which they photograph with talent and deal with their own aestheticism, they are “scouts of consciousness”, quick to convince us that it is still urgent to act.

The chosen themes at the festival were the ones of the hymn in nature, in the beauty and in the fragility of spaces and species, in brief iodiversity, the key theme retained by the UNO for year 2010.

The diving festival will be held at the Porte de Versailles in Paris from 15 till 18 January 2010.

Don’t hesitate to come and see our sponsor AQUAREV and to reserve a dive journey: 1€ is donated to TENDUA for each trip you buy!

The first showing of the film “OCEANS” in January, 2010

After 2 years of preparation, 4 years of shooting, 75 expeditions around the world and in all weathers, the best of Jacques Perrin and all the professionals who participated in this incredible adventure becomes reality.

Investigate the biggest wild territory of the planet and film from the five oceans. TENDUA met some of the photographers and the cameramen who participated in this epic: reserve your cinema ticket, the entertainment should be amazing …

TENDUA invites to Paris the Russian leading researcher involved in the projects of the Russian Academy of Sciences from the Russian Far-East on the Siberian tiger behavioural ecology and conservation, Dr Naidenko.

The information previously available about the number of Siberian tigers living in the wild was around 450, but unfortunately, it seems that in reality it should be closer to 250 individuals...

TENDUA wishes to organize a conference in 2010 with our guest on this subject. We will let you know when and where it will take place. Don’t forget that 2010 will be the Chinese year of the Tiger, which should bring each of us force, new energy and determination...

Did you see the French TV broadcast called « Thalassa » on October, 9th, where Frédéric Buyle, free diving world champion, was the « Man-fish »? Or maybe you were watching the last free diving world Championship which took place in the Bahamas where the finalist, William Winram, once more, won on Dec., 3rd, a silver medal and beat a new world record for dynamic free diving without fins reaching depth a depth of 86 metres?

Fred and Will are concerned with shark conservation programs and regularly work with scientists. From April 2010, they will propose free diving in South Africa for unbelievable encounters with the mystic Great White and the no less famous Tiger shark: YES, YOU CAN!!

For further information, and splendid shark pictures, or why not experience a real adventure, please visit: http://oceanencounters.net/journal/... 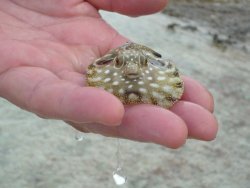 The maximum size of the white-spotted puffer is 50 cm Thanks to Maria for the picture she sent to us!
DR

And just for fun, look at the picture of a baby white-spotted puffer (Arothron hispidus), a fish living in tropical waters.

Its skin lacks scales but covered with spinules which make it rough and particularly stretchable.

In a situation of stress or defence, this elasticity allows him to increase quickly his volume by absorbing some water (or air as in this photo). 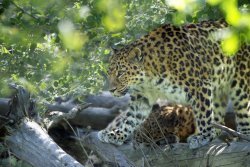 And the last picture that Alain Pons sent to TENDUA, just for pleasure, an Amur Leopard that you can observe in the Parc des Félins in Nesles (60km from Paris)...

We do hope you enjoyed reading our second newsletter. We would be grateful for any of your suggestions.

We wish you a MERRY CHRISTMAS and an HAPPY NEW YEAR 2010 which is going to be the YEAR OF BIODIVERSITY: the last chance for a change in consciousness?...