The main fisheries of sharks

Don’t hesitate to ask where and how the fish you are going to buy were caught, either in the fish shop or in the restaurant. It may help if people are more conscious and feel more concerned about this question.

Carcass of a dead crocodile in Kruger Park
DR

Some 170 crocodiles have been found dead since May, 2008 in the Krüger national park in South Africa, one of the largest animal reserves in Africa.

Scientists are working to contain the disease so that it does not propagate to other species.

The full grown reptiles whose size reaches several metres (up to 9m on rare occasions) do not have any natural predator. 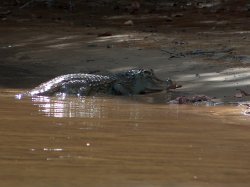 However, these immense reptiles were victims of an infection called Pansteatitis which hardened the fat in their body like rubber, making them incapable of moving and leaving them defenseless to the elements, hunger, drowning or attack from other predators.

This disease is usually caused by the consumption of rancid or damaged fish. 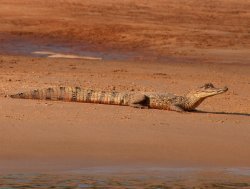 Young Cayman on the Rio Bita in Colombia
© M. Dupuis

The dead animals were discovered in a mud filled gorge, resulting from a nearby dam in Mozambique and fed by one of the most polluted rivers in South Africa - due to diverse heavy industries (mining, quarries and pesticide run-off from farms).

A research program was launched into the functioning of the river system to try to understand the cause of the epidemic.

The scientists are going to attempt to reproduce the disease in laboratory to understand how it propagates to crocodiles. Since this report it has been impossible to find anymore internet information on the subject...