In 1997, the " Great Pacific Garbage Patch” or GPGP was discovered. Ten years later its dimension is 3.5 million km2, the size of India or six times the size of France.

Scientists observe its on-going growth and in 2010, the media informed us of the discovery of a second garbage patch, this time, in the North Atlantic Ocean, 930km from the coast of the United States and near one of the biggest marine reserves. Its size is considered to be that of France, Belgium and Greece combined and its depth about 10m.

Essentially, it is a zone where water is saturated with solid particles. Two other patches are in formation off the coast of Chile, in the Pacific, and off Argentina, in the Atlantic Ocean.

These “seas of waste” are translucent and thus satellites cannot detect them but they are nonetheless visible from the decks of ships. This « plastic soup » contains sometimes very fine waste and it lies under the surface up to a depth of 30m.

How do these patches form?

These unfortunate situations are explained by the phenomena of whirlpool – vortex - in regions of high pressure: in these zones currents make the floating waste converge and accumulate in the absence of wind (called “gyres”).

Floating deposits are present in every sea, including in the Polar Regions. If fragments of organic origin undergo a biodegradation, most human activities produce huge amounts of waste that are not biodegradable.

The effect of salt, waves, ultraviolet (UV) rays transform the waste into billions of tiny and even microscopic particles.

What kind of waste? 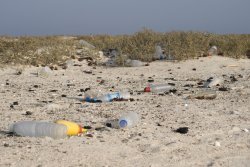 The worst pollution is caused by the chemical refuse from industrial and human activities, in particular agriculture. More than 80% of waste water finds its way into the oceans.

If about 80% of waste comes from land, the 20% left is attributed to maritime transport and boating activities. 90% of the waste is composed of plastics. The visible waste – plastic bottles and caps, toothbrushes, cigarette butts, lighters, fishing nets – overshadows other tiny pollutants known as the “tears of sirens” (granules and particles of plastic) and all the plastic products and their derivatives already in the degradation process.

Furthermore, every year an average of six million tons of other pollutants (heavy metals and chemicals) find their way into oceans via rivers.

In the 1970s, the London Convention [1] regularised procedures for the discharge of radioactive waste into the sea: 75,000 tons of radioactive barrels coated with asphalt and cement have been immersed up until 1982, when international and public pressure brought this to an end. How many barrels will resist erosion? And this is not counting the effects of past nuclear tests, nor the cemeteries of nuclear-powered submarines …

Impacts on marine life and humans 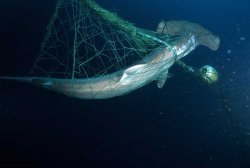 Mechanical impacts: the plastic waste can be the origin of the asphyxiation of seabed, by preventing the exchanges between the water and the sediments. Some species suffocate by taking this waste as prey and eating it. Others become caught in fishing nets or ropes, injure themselves and are incapable of feeding themselves or to avoid predators.

Chemical impact: Poisoning by waste containing toxic products or pathogenic agents (batteries, solvent or detergents) is frequent. The degradation of some specific waste is at the origin of chemical pollution: plastic bottles release biphenyl and phthalates into the water.

Plankton is an essential link of the food chain. According to the Foundation Algalita, waste zones contain up to 6 times more plastic than plankton. Fish and other plankton-eaters that are feeding on plankton also ingest these micro plastic elements. Plastic and harmful chemicals find their way into the food chain all the way to humans: fish being eaten by bigger predators and finally eaten by top-predators such as humans.

We consider that each year more than one million birds and 100,000 cetaceans die because of plastic ingestion and that 35% of fish are containing plastic elements.

The clean-up of ocean waste is a titanic undertaking and no authority seems to be willing to take any leadership, and the ‘tab’ associated with it. At the international level, it is necessary to take measures in the development of efficient policies and regulations to avoid worsening the situation.

At a lower level, adopting responsible consumer behaviours is a first step. Small gestures like limiting the purchase of plastic packaging, the use of contaminants and cleaning our own waste and taking part in community cleaning activities can easily be done and collectively, it has more impact.

Things being what they are, countries bordering the Mediterranean Sea throw at it annually approximately 50 million tons of waste. 250 billion plastic particles float on the water of the Mediterranean Sea according to scientists. The MED Expedition 2010 / 2013 is a scientific, environmental campaign involving ten European research laboratories. This program, the first of its kind in France and Europe, highlights an alarming phenomenon in the Mediterranean: the presence of a quasi-invisible pollution likely to enter food chains - pollution by plastic micro debris. 30% of the world maritime business takes place in the Mediterranean and with it 22% of the world oil traffic. This maritime activity of course brings a huge lot of pollution. The goal of the MED Expedition’s studies is to specify the consequences of intrusive residues on the Mediterranean Seas marine biodiversity. More information about what action to undertake can be found at: http://www.expeditionmed.eu/petition/