JAPAN : a new island emerged from the ocean

This island is the result of a volcanic eruption on November 20, 2013. Located about 1000 km south of Tokyo, the volcanic island emerged near the uninhabited island of Nishinoshima. It is composed mainly of hardened lava and originally measured 400 meters long and 200 meters wide.

The island grows as its craters still spit lava. The craters of the island spew daily about 200 000 m3 of lava. To give an idea of how much it is, it could fill 80 Olympic swimming pools each day with all that lava. According to the Japan Coast Guard, its size has increased : in July 2014, its size was 1550 m on 1,350 meters, and it could continue to expand. The Nishinoshima island is now joined by the new island. This set now covers 1.26 km2 of territory and does not seem to stop from spreading.

TUNISIA : the emergence of a new lak

In southern Tunisia, 25km from Gafsa, a town of 85,000 inhabitants, a lake with an area of more than 1 hectare and a depth of 20m, appeared on the site Effath, a former desert canyon already been renamed “Gafsa Beach”.

The origin of the formation of this lake remains to be determined. One hypothesis advanced that minor seismic tremors could fracture the rock to an aquifer. Under pressure, the million of m3 of water that makes up the lake would be brought to the surface. A first hypothesis proposed by a geologist of the Faculty of Sciences of Gafsa who finally challenged this possibility.

According to the Regional Commission for Agricultural Development Gafsa, it would be just a basin in which has accumulated rainwater. A final hypothesis argues that three sources of fresh water would have emerged and converged on the site.

The mysterious lake became the prime attraction in the area. But swimming here has two major risks. First, the basin in which the lake was formed is a former phosphate operating site, of which the soils of the region are exceptionally rich. However, this phosphate is likely to have contaminated the water, thus rendering it radioactive and carcinogenic. The journalist Lakhdhar Souid, living in the region and who follows the evolution of the phenomenon since its appearance, said that «the first few days, the water was crystal clear, turquoise blue. Today, it is green and filled with algae. That means that the water is not oxygenated and is conducive to disease.»

Furthermore, if the hypothesis of the underground origin proves to be correct, it is likely that the lake still communicates with the water from which it came. If that was the case, siphons can then train and suck the unwary swimmers to the bottom. Besides diving competitions - a never risk-free activity - that engage the dozens of young. And, especially since no monitoring system has been put in place. «There is no security: no lifeguard and civil protection came only the first day», still regrets Lakhdhar Souid.

The NASA has published a series of photographs illustrating the shrinking of the Aral Sea, straddling Kazakhstan and Uzbekistan. The NASA could also published series on what happens in Alaska, Colorado ... but that would be another article ... 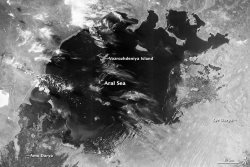 Satellite picture of the Aral Sea in 1964
© NASA

In the 1960s, the Aral Sea, further fueled by the mighty rivers Amu Darya and Syr Darya, was formerly one of the four largest lakes in the world with an area of 66,458 km2 (approx.26,000 sq mi). In 2000, the area was divided by two. This drying due to the diversion of two rivers to produce cotton by weight, is one of the largest natural disasters of the twentieth century.

In August 2005, the construction of the dike Kokaral between the small northern part of the Aral Sea in Kazakhstan and the rest of the depression, was completed. The small northern part was called then the small Aral sea and thus is preserved of the drying up. Since then, the southern part, originally called the Large Aral sea, receives virtually no surface water and is largely dry.

These derivations have helped irrigate hitherto desert areas but dried up sources of income for fishermen. The dust from the lake, mixed with chemicals related to agriculture becomes even dangerous.

Don’t worry : everything is going well for our wardrobes. We are still able to buy more jeans’ and other cotton items than we can wear ... at which ecological price ??

WORLD : less and les fish in our oceans..

During the summer of 2014, a scientific study on the impact of fishing on marine resources has painted an alarming fact: fish stocks fail to recover. The oceans are emptying, inexorably. The news has gone unnoticed in the hubbub of the news, but, Tuesday, October 14, the European Fisheries Council did met to adopt measures to reduce catches of cod and salmon. But much less than would be necessary for the sustainable maintenance of fish stocks. Didier Gascuel, a scientist specializing in fisheries, participated in this important study. «Until the late 1990s, quotas were somewhat restrictive. Suddenly, the fish became scarce in European waters. For over thirty years, overfishing has destroyed deep marine ecosystems. And since 1970, catches were divided by two!», he said. Faced with this crisis, stronger measures were taken, including more restrictive quotas, which were closer to scientific advices. These measures have proved relatively effective. In twelve years, fishing pressure has been halved. Some stocks, such as the North Sea plaice and the hake, have recovered. This is an unexpected result. But beware : the quota policy has not solved everything, far from it.

The expected results are not met. Overall the resources did not increase as expected. And biodiversity did not improve, or just a little. Especially, young fish are fewer and fewer. This is quite worrying, and that is the surprise of this study. 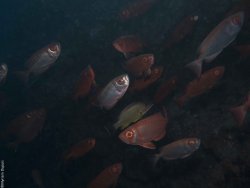 If there are fewer young fish, it may mean that there are fewer births but also the larvae from the reproduction do not survive in the absence of a sufficiently rich and stable ecosystem. And overfishing is not the sole culprit. Coastal habitats have been severely degraded; and, they are important breeding areas. In addition, global warming is changing the composition of the plankton that feed the larvae. In short, it is quite possible that the stocks do not rise up again. The crisis is not behind us. Large predatory fish are still in danger, and they are the ones that ensure the stability of ecosystems. And overfishing was so important that it may take years before the marine environment recovers. We must continue the policy of quotas, no doubt. But it is not enough. We should also develop protected areas where fishing is completely prohibited in areas of reproduction, for example. We are also looking to highlight techniques and most virtuous fishing methods. Take into account the differences between fleets. A flotilla is a group of fishing boats in the same fishing class in the same area, as the Breton trawlers. And some fleets are more virtuous than others. We could introduce a bonus-malus system, or modulate the quotas. But the fishermen are very reluctant, and the regulation is not in fashion right now in Brussels. " lhttp://www.reporterre.net/spip.php...