Early October, 2013, the French Constitutional Council had to take a decision concerning the issue of the exploitation of shale gas in France. On October, 11th, an estoppel was addressed to industrials by the Constitutional Council, confirming the ban on hydraulic fracturing in force since 2011 in France. However, if the law provides for the prohibition of shale gas by hydraulic fracturing, it does not prohibit exploration neither experimentation.

At the occasion of the International Day against “fracking” on 19/10/13, street demonstrations were held in several cities in France against the exploration and exploitation of shale gas. Of course, the recent decision of the Constitutional Council was well received, but we must not lower our guard. In fact, the article 2 of the Jacob Act of July 2011 is not challenged and drilling for experimentation and exploration are still allowed, and the drilling permits have not been removed.

How does it work ?

The first experimental use of hydraulic fracturing was in 1947, and the first commercially successful applications were in 1949. The hydraulic fracturing, commonly known as fracking, is the fracturing of rock by a pressurized liquid to extract hydrocarbons, to create small fractures (typically less than 1mm), along which fluids such as gas, petroleum and brine water may migrate to the well. A well-bore is drilled at depth of 1000 to 4000 meters (indeed!) ; it is consolidated by a concrete shuttering. The wells may be vertical, horizontal or inclined. It also happens that fracking is practiced near the surface. An explosive charge is then placed to fracture shale, where is the gas. A fracturing fluid, a mixture of water, sand and chemical solvents, is sent under very high pressure (600 bar) into the well to crack and micro-crack the rock. The sand keeps the cracks open. The gas is removed to the surface. What happens to the fracturing fluid? 50 to 70% remain in the shale layer, the rest rises through the well. Of course, sometimes the shuttering of concrete cracks under the pressure and the gas AND the liquid escape from well through porous rocks, possibly to the groundwater ... 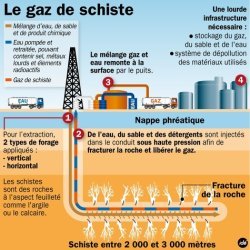 On the surface, the ballet of trucks begins. Trucks (up to 200 in the Marcellus Basin in the United States) evacuate the recovered fracturing liquid and the gas. Heavy infrastructure is needed : the gas storing (storage and transportation of gas by pipeline), the sand and water storage, but it is also necessary to have a system of “de-pollution” of materials used.

The destruction of the environment

The gas and the fracturing fluid which have not been channeled must find a way out: the gas rises in the pipes running water, the running water is charged of chemical substances (sometimes radioactive) from the fracturing fluid, the gas escapes from river beds, the air quality deteriorates ... Many risks to nature and human health , one being inseparable from the other. Is that all worth it ? And do not be fooled: the matter is the one of our energy consumption, specifically the carbon energy responsible for global warming. By drilling these wells, we are destroying our environment, and we are only postponing the inevitable deadline of the end of fossil energy resources, and our necessary questioning.

In this regard, we recommend an animated film about thirty minutes that clearly outlines the question of our mode of exploitation of fossil fuels and natural resources, its impact at the global level and the impasse in which leads us to our current growth model :

What are the estimated shale gas reserves and what does it correspond? The only figures available globally are those of the U.S. EIA (US Energy Information Administration), and these are based on a compilation of studies that generate controversy. On June 10th, 2013, the agency has delivered its latest study. It reviews 137 deposits in 41 countries: in total, the estimation is of 345 billion barrels the amount of technically recoverable shale oil, ten times more than its 2011’s estimate. Is it enough to justify the massive drilling undertaken in the USA, at the expense of the people’s health ? Reserves of shale gas are reassessed 10% to 207,000 billion m3. Anything can happen when you read that China would be the world’s richest countries in shale gas (31 500 billion m3) and the third for the shale oil (32 billion barrels). The United States, themselves, would be located in 4th place for gas and oil for the second. Argentina, Russia, Algeria, Canada and Mexico are also on the list.

Rate of recovery and productivity ... not so good

Only the exploration and production tests allow to determine both the productivity of each drilling - the quantity of hydrocarbons - and the recovery rate, which measures the portion of technically recoverable deposit. On the average, the EIA estimates this last between 20 and 30%, based on the characteristics of the American rocks. But for the IFPEN, it could be less than 10% in the Parisian Basin, or even zero in some places.

For example, Poland, to which the EIA had dangled raw and actuarial estimates (in 2011, deposits were estimated to 5,300 billion m3), was disillusioned after thirty exploratory drillings on three sites. The reserves were revised downward in March 2012, divided by ten by the National Institute of Geology and the giant Exxon Mobil withdrew from the country.

Even in the USA, the only country which operates on a large scale gas and oil shale, the productivity and the recovery rates are still struggling. With other factors involved, such as the cost of extraction and the opposition of a part of the opinion, there is no guarantee that the U.S. will be able to still derive much benefit from their basement. And then, if you still prefer to believe in the future of shale gas, given our “runaway energy consumption”, these reserves are going to ensure our energy needs just for a few years, at the cost of destroying the very long term our environment. 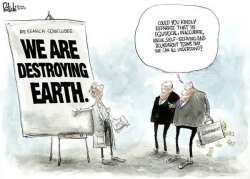