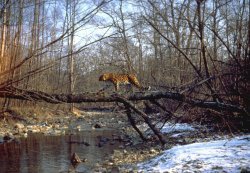 In early 2009, SVAA received the sum of 500€ from TENDUA. This amount should help the association located in Meghalaya (which means “Above the clouds”), in North East India to save Hoolock gibbons. SVAA has found 3 rare individuals: 1 male, 1 female and 1 juvenile that are living in very bad conditions. We hope and trust that SVAA will be able to swiftly act to care for these apes. We continue to provide more progress information as we receive reports.

TENDUA contributed 500€ to Noe Conservation for their conservation program of sawfishes and manatees in Guinea Bissau. The experts from the Noe Conservation association are actually in West Africa and they will transmit the result of their in-situ observation in March, specifically reports about the counting of local current populations.

TIGRIS also benefited a financial support of 500€ from TENDUA in early February 2009. Despite the weak number of remaining individuals living in the wild (less than 30 cats as of last counting in 2007), the protection program of the Amur Leopard seems to be progressing well. Tree teams of rangers are working in the Region of Vladivostok with trained dogs, fighting against poaching, giving compensation to farmers for killed livestock, installing fire-fighting systems as fires are a direct threat to Amur Leopards and their natural habitat, replacing it with grasslands. A reintroduction program is under consideration. TENDUA will also continue to report progress in this important activity. 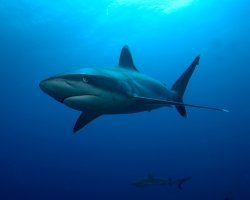 Silvertip shark - C. albimarginatus
For the record, French Polynesia was the first country to ban shark fishing and especially the finning in 2006 - © M. Dupuis

Michel Barnier, the French Minister for Agriculture and Fishing, received on January 15th, 2009, 20,000 signatures from French citizens who are asking for action to be taken against the over-fishing of sharks, via a European Action Plan which should be substantial and rapidly set up. The Minister committed to putting pressure on his European colleagues in order to “strengthen the fight against finning”, a cruel practice consisting in cutting the sharks’ fins on-board and throwing the still-live animal back to the sea.

The petition was organised by Shark Alliance, a coalition of 61 European Non Governmental Organisations, including 7 French organisations. All of them participated in the Second European Sharks’ Week from October 11th to 19th, 2008, during which more that 250 events were organised and 95,000 signatures collected. In Europe, most of the sharks and rays are victims of over-fishing; a third are threatened with extinction. Even though, most of European fishing factories do not follow the scientific recommendations, and finning interdiction in Europe is the most lax.

At the end of January 2009, the European Commission will publish the European Action Plan for Sharks to ensure their conservation resulting from fishing and trade regulation and habitat protection. European Ministers of fishing shall give their opinion about the Plan by the end of April. An Action Plan with strong measures could help to reverse the actual trend and allow the European regulation on sharks to catch up for lost time, and involve other countries together to avoid shark extinction and the degradation of all the marine ecosystems that sharks are maintaining in ecologic good health.

Tendua is very happy to announce the support of the French Tour Operator AQUAREV’, very well known in the diving world. AQUAREV’ will support the projects of TENDUA beginning in 2009. Thanks to AQUAREV’ for this mark of trust! 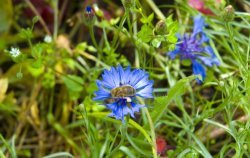 Bee on a blueberry
“If the bee disappears, man would that a few years to live”. Albert Einstein - © M. Dupuis

The Saint-Gaudens Court (Haute-Garonne, France) issued a judicial order of withdrawal in favour of chemical groups BASF Agro and Bayer CropScience that both marketed the Regent pesticide (neurotoxin) and that are accused by beekeepers to be at the origin of the bees’ overdeath in 2002-2003.

The Ministry of Agriculture prohibited the use of Regent in France the day after the impeachment in this case. The French Union of Beekeepers (UNAF) announced their intention to appeal against the withdrawal.

For more than 30 years the bees’ populations decrease in France. Even so, bees are a major player in pollination process. This is all the interactive chain for a given ecosystem which is out of order: no bees = no pollination = disappearance of certain vegetable species = extinction of certain animal species. 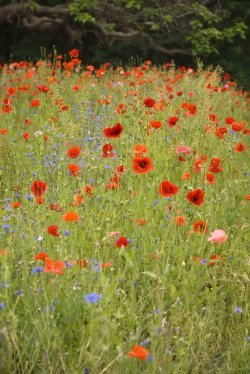 A field of poppies in Vincennes
© M. Dupuis

Bees are suffering from very fragile health: malformations, internal lesions, troubles of the nervous system and troubles of behaviour, disorientation. They are no more able to find their way back to the hive or the group turns them back.

Another pesticide from Bayer is also under consideration for banning: the Gaucho, which was put out from market in France (but sold in 70 countries).

This urgent issue has been known for the past 10 years. In France, honey production has declined from 30% to 90% across various regions. Similar trends are observed in Germany, Italy, Russia, and in Canada and in India viruses hold sway. In Iraq smoke from fires of oil wells killed entire bee colonies.

Bees have been living on Earth for 80 millions of years and offer honey to people since the Stone Age, as depicted by ancient rupestrian paintings.